Slate’s Explainer series had an article last week that attempted to get to the bottom of the following question (a version of which some of you may have also wondered about in the past):

Recent news reports about the Congress Party’s election victory note that two-thirds of Indians live on less than $2 per day. How far does two bucks take you in India? [Link] 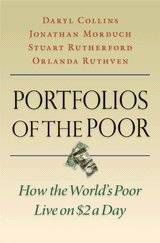 Not far in Mumbai, but it’s a living in the villages. The people who get by on less than $2 don’t even qualify as being in poverty, according to the Indian government’s own definition…

India, like the United States, uses a “basket of goods” approach to define its poverty threshold. The cost of a minimally adequate diet is multiplied by a set amount to account for the cost of food and other essentials. (The United States multiplies by three, because the average American family spends one-third of its post-tax income on food.) The European Union uses a different method, based on relative income: The poverty line is set at a certain percentage of median income.

Neither of these methods works on a global scale, though, which explains why the World Bank has its own system. The “basket of goods” approach can be confusing, since every country uses different goods in their equations, based on local dietary habits. [Link]

In a new book titled Portfolios of The Poor – How the World’s Poor Live on $2 a Day, authors Daryl Collins et al. explored the daily economics of the poorest of the poor with some insightful results. EconLog reviewed the book:

I really liked Portfolios of the Poor: How the World’s Poor Live on $2 A Day. Westerners tend to think of the world’s bottom billion as charity cases. The harsh and amazing reality, though, is that they largely stand on their own two feet. The ultra-poor not only feed, house, and clothe themselves; they raise children and work hard to give them a better life. Portfolios shows us how they do it, relying heavily on financial diaries kept by villagers and slum dwellers in South Africa, India, and Bangladesh. [Link]

Here is one of the lessons that the reviewer at EconLog summarizes from the book:

2. No one, no matter how poor, lives “hand to mouth.” Even the poorest people save money, make investments, and plan ahead. [Link]

It is striking given that the above is a lesson that seems to have been ignored by a great many in the West (individuals, companies, and governments) that are suffering through this economic crisis. Some of the biggest U.S. investment banks over-leveraged by almost 10 times their worth. I also think that the following conclusion demonstrates that weddings (especially ridiculously elaborate desi weddings) are a great place to trim the fat and help people get a leg up on saving for their future:

4. Even the poorest people spend a lot of money on things other than food. One of their main reasons for saving and borrowing is to pay for relatively lavish weddings and funerals. [Link]

. There is also some commentary in the book about the effectiveness of microcredit co-ops:

…most consumers… continue to transact largely in the informal sector, and it is not hard to see why. The interface with the microfinance institutions remains the weekly village meeting, a breakthrough of the 1970s that is now looking somewhat stale: meetings consume too much precious time, there is no privacy, individual needs go unrecognized, the male workers tend to patronize the women members, and more and more members skip the meeting if they can, preferring just to show up and pay their dues as quickly as possible. [Link]