For wine makers and distributors, India is virgin terrain ripe for the plucking (to mix metaphors). Although wine arrived with the Persians around two millenia ago, wine drinking was never popular or widespread. 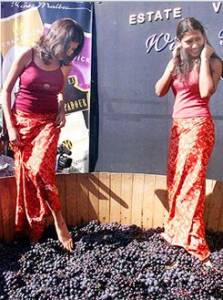 What little wine production there was got crushed by the phylloxera epidemic of the late 1800s, and hit further hurdles at Independence when many states went dry. The constitution of India itself used to state that “one of the government’s aims was the total prohibition of alcohol” [wiki]

Fast forward to the present, when wine drinking is being pitched heavily to the urban intelligencia, especially younger women:

Bhagwat is single and lives in Bangalore. On a recent trip to her parents’ home in the conservative Chhattisgarh in central India, she sipped wine while her father drank scotch and soda. Her mother, she recounts, looked on silently. “Wine is the only drink I can have without offending the family elders,” she said. [link]

Wine drinking is still at fairly low levels compared to Europe or the US, with average consumption under a bottle a year and large areas of the country where wine isn’t drunk at all [link], although it is increasing at around 20% a year.

Right now there are around 40 wineries in India with around 3,000 acres under cultivation. My advice to them? Invest more in marketing and less in “quality”: wine drinkers are highly suggestible and the “wine experience” is all hype. Why should they listen to a non-drinker? Because I have science on my side:

p> In two experiments done by Frederic Brochet, of the University of Bordeaux, wine experts were fooled into thinking that white wine with red food coloring was red wine and judged the same wine entirely differently based on the label on the bottle and price tag:

In the first test, Brochet invited 57 wine experts and asked them to give their impressions of what looked like two glasses of red and white wine. The wines were actually the same white wine, one of which had been tinted red with food coloring. But that didn’t stop the experts from describing the “red” wine in language typically used to describe red wines. One expert praised its “jamminess,” while another enjoyed its “crushed red fruit.” Not a single one noticed it was actually a white wine.

The second test Brochet conducted was even more damning. He took a middling Bordeaux and served it in two different bottles. One bottle was a fancy grand-cru. The other bottle was an ordinary vin du table. Despite the fact that they were actually being served the exact same wine, the experts gave the differently labeled bottles nearly opposite ratings. The grand cru was “agreeable, woody, complex, balanced and rounded,” while the vin du table was “weak, short, light, flat and faulty”. [link]

I’m not saying there are no differences between wines, I wouldn’t know I’ve never had any. I am saying that the science shows that even for experts (in France!) the differences are tiny and easily crushed by their expectations. Buy really fancy bottles. Win lots of irrelevant competitions. Get endorsements. Serve your wine in blind taste tests where you have a chance of winning something by chance alone. At the end of the day, it’s not about the grapes, it’s about the marketing.

61 thoughts on “In vino, marketing”