Earlier this year, wedding bells in California started ringing for people in the gay and lesbian community when the California Supreme Court ruled that denying same-sex couples the right to marry violates the promise of equality in the California Constitution. But all that might change on November 4th.

Desis in the GLBT community in California have been getting organized. Down here in Southern California, Satrang has been taking the lead and showing up at events and handing out educational materials to push for no on Prop 8. Bay Area based Trikone has stepped it up and taken it further. They took out an ad in India Currents with the following poster: 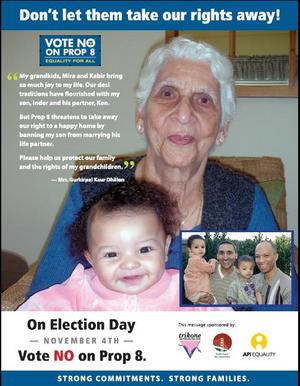 The Mutiny is a a sucker for the advocating Nanis/Dadis and this poster of the the grandmother holding her granddaughter is just too adorable. Her message?

My grandkids, Mira and Kabir bring so much joy to my life. Our desi traditions have flourished with my son, Inder and his partner, Ken. But Prop 8 threatens to take away our right to a happy home by banning my son from marrying his life partner. Please help us protect our family and the rights of my grandchildren.

Inder and Ken and their family were profiled in India Currents earlier this year.

Inder, a dermatologist, and his partner, Ken, a Corporate Officer, first started talking about children in Spring 2003 when they became domestic partners. â€œWe are both from large families,â€ Inder explains in his considered, correct way, â€œand it seemed like a natural progression to have our own kids.â€ Today they are a family of four: Inder, Ken, Kabirâ€”who is two and a halfâ€”and Meera.[IndiaCurrents]

Their families have have been very supportive in the raising of the children.

â€œOur families are our biggest support groups,â€ [Inder] says, â€œWe both have large, extended families. Hereâ€™s where the embracing, extended Indian familyâ€”with its Aunties who want to fatten you up for your own good and third cousins whom you have to see every month because they are familyâ€”can actually be a powerful support structure. But often, in South Asian communities, [Bay are psychologist] Amlani explains, there isnâ€™t much support from the family for same-sex partnerships.[IndiaCurrents]

There are other rights that the couple have to struggle with outside of the right to marriage – the access to immigration. Inder is an immigrant whereas Ken isn’t.

Inder and Ken do face some other issues that heterosexual parents donâ€™t. Immigration, for one. The Federal Defense of Marriage act defines marriage as a â€œunion between one man and one womanâ€ (This means that opposite sex spouses can be sponsored, but same-sex partners canâ€™t).[IndiaCurrents]

Proponents of Proposition 8 argue that the state of California has a domestic partners law in place that gives same-sex couples the same rights and benefits as married couples. While this is true, opponents of the proposition say that California’s constitution guarantees equal rights for everyone, therefore same-sex couples should also the right to legal and recognized marriage.[EasyVoterGuide]

Either way you feel about the issue of same-sex marriages, this is an issue that affects the South Asian community. Here’s what Runa @ UberDesi has to say:

Take a look at her two cute grandkids – how can the government deny them the right to have married parents? And in case you are still against gay marriage – here is a thought: No one is forcing you to have one. Why are you denying a section of society which is voluntarily accepting the rights and obligations of marriage the same opportunities as the rest of us to either make a grand success or a miserable failure of it?[UberDesi]