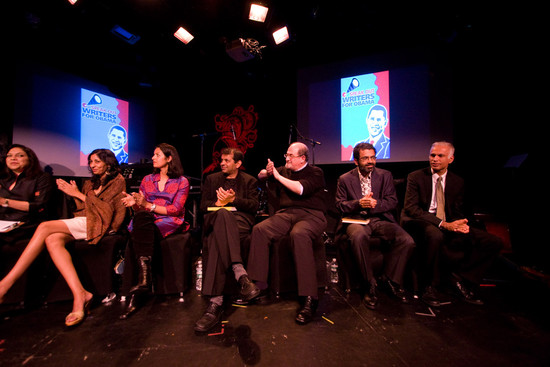 This past weekend I returned to NYC for an event I knew would be too good to miss: Writers Speak Out for Obama, featuring an all-star line-up.

Considering this blog’s longstanding interest in matters both literary and political, I figured SM readers would want to see the scene. So here we go. Six literary giants came out to read for the benefit, which was the brainchild of Meera Nair (the writer) and emceed by Mira Nair (the director). It was not an official Obama event, but rather, as Meera noted, “community organizing.”

Above, the luminaries themselves. Thanks to Preston Merchant for letting me use his pictures, which, predictably, are awesome. Left to right: Mira Nair, Kiran Desai, Jhumpa Lahiri, Suketu Mehta, Salman Rushdie, Akhil Sharma, Manil Suri. Yes, really. All of them. Together.

Before I go too much farther, disclosure: the event did not provide press passes, so I paid $100 for entrance (which was more than fine with me, as I support Obama too). And I saw many familiar and friendly faces among the organizing committee and attendees.

Everyone was excited. The last time something like this happened way back in 2005. Now we faced a stage that boasted two Booker Prize winners, a Pulitzer winner, a Pulitzer finalist, one of Granta’s best novelists under 35, and a Time Magazine “Person to Watch.” (Rushdie-Desai-Lahiri-Mehta-Sharma-Suri, btw.) Pretty cool to see what the desi arts community can assemble.

Now, political leanings aside, I’d like to be a little different, so I’m going to try to focus on the literary here. What words did these writers choose for this moment? Did they elect sad? Funny? Patriotic? 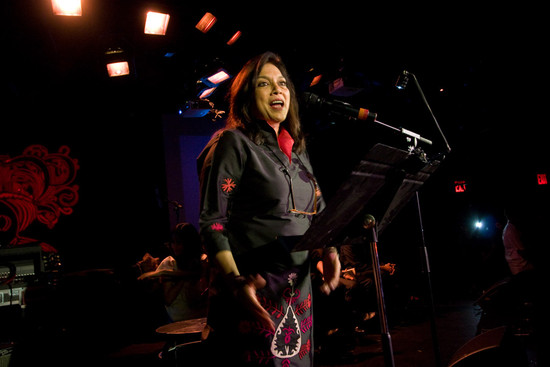 There were some fascinating choices. Each writer spoke briefly of their hopes for Obama before reading. They went in “alpha order,” as Mira Nair put it, so Kiran Desai began. (Unfortunately, my notes here aren’t good and I can’t determine what she read, except that it was lovely. Anyone else who was there enlighten me?) 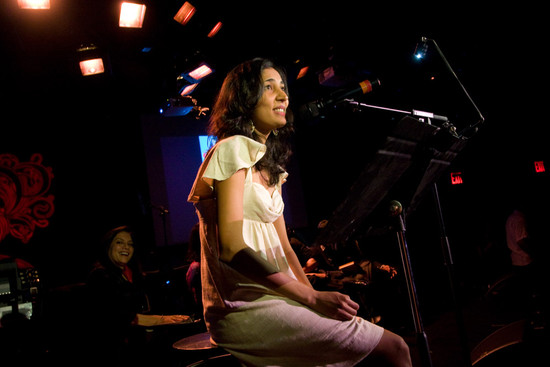 Then Nair introduced Lahiri. (“Here’s a line I didn’t write,” she joked. “Her novel was made into a highly acclaimed film.”) 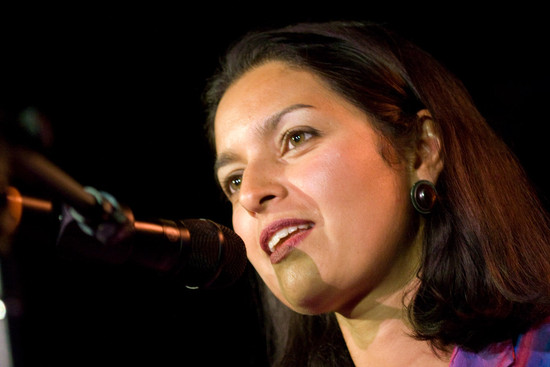 Before she was invited to join the event, Lahiri said, “I was feeling quite desperate to do something [to help].” The outcome, she added, has never meant more. She proudly told the crowd that her parents had just voted before leaving on a trip to Calcutta. She read from “Year’s End.” (The story is part of Unaccustomed Earth and originally appeared in The New Yorker. It’s the heartbreaking story in which Kaushik meets his stepmother and stepsisters.) 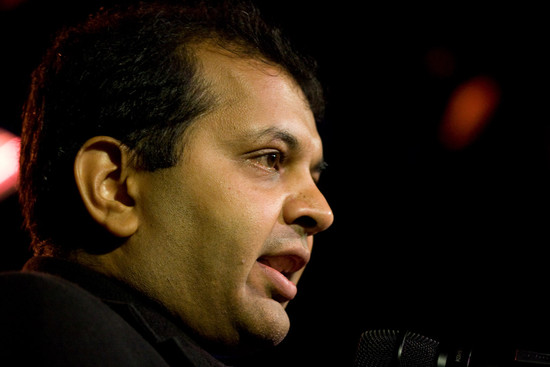 Suketu Mehta followed Lahiri, and read from part of a column he had written. I can’t seem to find this on the web either, but it was quite funny. Suketu also praised Obama’s speech on race–a politician quoting a novelist, he noted. We need extraordinary leaders now, he said, and added: “We got lucky. We have Barack Obama.” 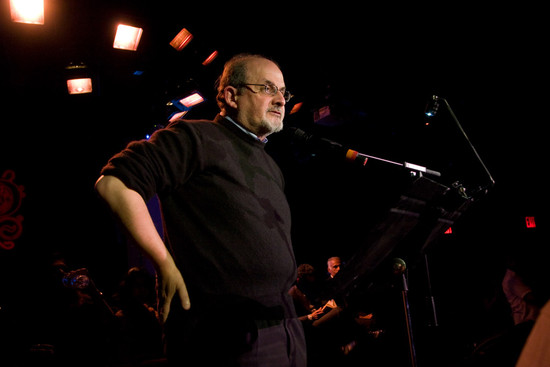 Rushdie followed Mehta with a humorous but entirely sincere plea for attendees to give more. “Please don’t feel that you’ve given enough,” he said. Think, he said, of how good it sounds: President Barack Obama. “It’s kind of strange for me to stand here praising a politican,” he added–considering Indira Gandhi, General Zia, Margaret Thatcher, and the Ayatollah, his experience with politicians has been… difficult. (The crowd roared with knowing laughter.) Now, however, he said, “Cometh the hour, cometh the man.”

That same note of fate tinged his reading from Shalimar the Clown. When I got back home to my digs in upstate NY, I went to the library at the college where I am teaching to look up exactly what it was that he chose. From page 17, a part:

“If you succeed in seeing through the fox-man’s tricks, and if you get past him, you will find yourself in the room of power. The room of power is unimpressive and in it the man of power faces you across an empty desk. He looks small, insiginficant, fearful; for now that you have penetrated his defenses he must give you your heart’s desire. That’s the rule… How much of it will you manage to bring out of the house of power?… And when you’ve made it and are outside again, squinting painfully in the bright light and clutching your poor, torn remnant, you must persuade the skeptical crowd–the envious, impotent crowd!–that you have returned with everything you wanted. If you don’t, you’ll be marked as a failure forever. “Such is the nature of power,” he told her as she slipped toward sleep, “and these are the questions it asks. The man who chooses to enter its halls does well to escape with his life. The answer to the question of power, by the way,” he added as an afterthought, “is this: Do not enter that labyrinth as a supplicant… Freedom is not a tea party, India. Freedom is a war.”

I LOVE this passage. 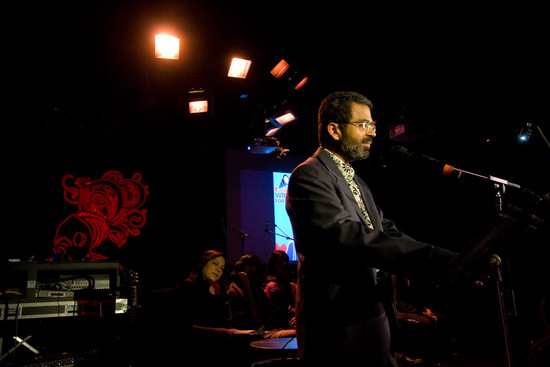 Akhil Sharma followed Rushdie, and chose to read from True Grit, by Charles Portis. (The basis for the John Wayne movie of the same name, he explained. I haven’t read it, but since Sharma recommends it, I’m going to go pick it up. Has anyone else read it?) 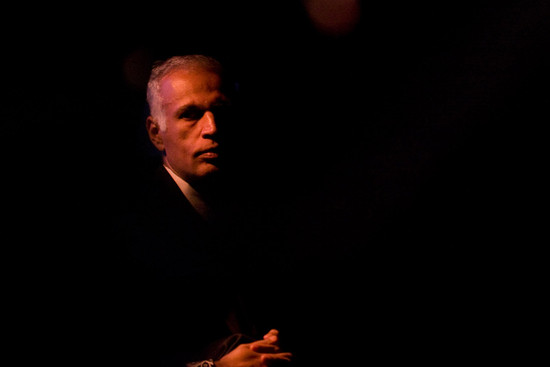 Finally, Manil Suri concluded the evening by reading the opening passages of The Age of Shiva. Suri also encouraged people to watch his recent Bollywood-style dance performance on YouTube. One caveat: if you watch it, he said, make another contribution. (If you haven’t seen it, it’s hilarious. I think Ultrabrown had it up earlier, but I’ll link to it again here.)

That’s all, folks! I hope that gives people who wanted to come and weren’t able to a flavor of what happened, but I’m interested to hear what you thought of the reading selections, and what you might have picked if asked to read at this moment in this election… any passages, particularly any by desi writers, spring to mind?

Oh, and one last picture, ’cause it’s just a great shot. 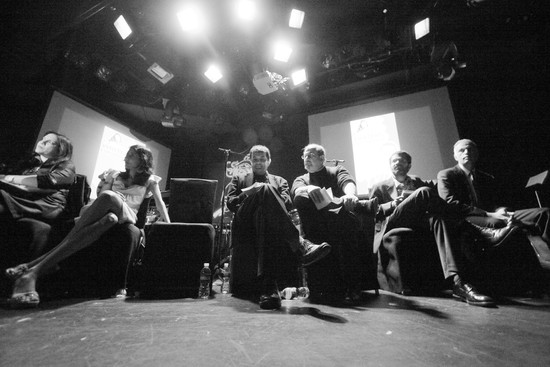