Last week Nina Shen Rastogi at Slate asked the question, “If we’re in the midst of a financial collapse, why aren’t executives jumping out of office buildings?”

Because the current situation hasn’t had nearly as devastating an effect on people’s personal finances. The Great Crash of 1929–and, to a lesser extent, the crash of 1987–did lead some people to commit suicide. But in nearly all of those cases, the deceased had suffered a major loss when the market collapsed. Now, due in large part to those earlier experiences, investors tend to keep their portfolios far more diversified, so as to avoid having their entire fortunes wiped out when stocks take a downturn. In addition, some of the worst declines in the past week have been limited to a smaller number of companies (such as Lehman Bros., Morgan Stanley, and Goldman Sachs), further limiting the potential damage to individual investors. [Link]

Sadly, we may be about to see people’s personal finances affected if things keep going bad. This afternoon there was tragic news out of the San Fernando Valley. An out-of-work Indian American financial advisor killed his wife, mother-in-law and three young sons before turning the gun on himself: 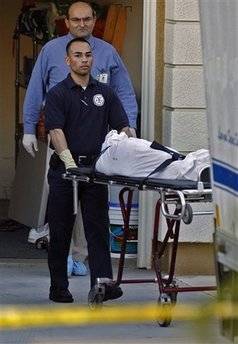 “We believe this to be a murder-suicide,” Moore said. “It appears [the gunman] killed his family and then took his own life.”

The bodies of the man’s 39-year-old wife, 70-year-old mother-in-law, and three sons — ages 19, 12 and 7 — were found inside the home’s various bedrooms. Authorities had earlier said that one of the victims was the gunman’s mother but now say it was his mother-in-law.

Friends and neighbors identified the couple as Karthik and Subasri Rajaram, who had lived in the neighborhood for a few years.

Moore said police believe that the gunman shot the victims sometime after 6 p.m. Saturday, and that he had left behind three letters indicating that he had carried out the killings. One letter, addressed to law enforcement, confessed to the shootings. He wrote a second letter to friends. The third letter, police said, appeared to be a will.

Moore said Rajaram had previously worked for Price Waterhouse and Sony Pictures and “had attested to some financial difficulties,” Moore said. “He had become despondent over his financial” situation…

One of the young victims, Ganesha Rajaram, 12, was a 7th grade honors student at Alfred B. Nobel in Northridge, which he had attended for the last two years, said Principal Robert Coburn. His parents were very involved in his education, frequently interacting with teachers and never showing any signs that anything was amiss, he said. [Link]

Of course it is pure speculation at this point to assume that Mr. Rajaram’s financial woes are directly related to the current bear market, but the San Fernando Valley was one of the hardest hit in the sub-prime debacle. Hopefully this remains an isolated incident and not a national trend.

67 thoughts on “Tragedy in the San Fernando Valley”