“Mariska Hargitay.” Say it aloud, softly and with reverence: “Mariska Hargitay.” Yes, it’s the name of the actress on Law and Order, but from the lips of Mike Myer’s newest creation, Guru Pitka, it’s a mantra, a blessing, and a joke that never stops giving. 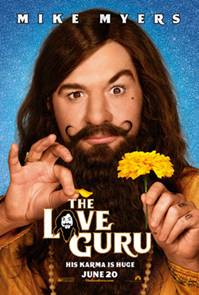 I went to see The Love Guru with hackles raised and claws sharpened. I came to bury, not to praise. But 87 IQ-draining minutes of fart jokes, midget jokes, and sight gags (ever wanted to see someone literally have his head up his ass?) later, I came out slightly charmed, humming the Guru Pitka song and wishing my friend “Mariska Hargitay” every time he sneezed. Light-hearted, good-natured, and silly beyond belief, the movie might bore those who can’t easily access an inner 12-year-old, but for everyone else it’s well worth at least 5 demerits on the Hindu Janjagruti Samiti chart.

Mike Myers built a career playing outsized characters, goofiness masking the fact that world inhabited by those characters, the entire point of the parody, revolved around something actually not all that familiar to most Americans. Sprockets? How many Americans knew anything about West German Mimimalism, let alone enough to mock it? Wayne’s World? Brought GenX tropes and Slackers and cable access television to the mainstream in 1992. Austin Powers? It seems obvious now, but British 60s spy films weren’t on anyone’s cultural radar in the mid-90s.

So now that his new creation satirizes Hinduism, spirituality and the Guru-Shishya relationship, what will mainstream Americans make of it? How offensive is Guru Tugginmypudha?

Played by Ben Kingsley, Guru Tugginmypudha (say the name slowly…Yup) heads an ashram in the small fishing village of Harenmahkeester (sigh), India. The guru is permanently cross-eyed, and pours tea by inserting the teapot spout into one nostril and catching the liquid that pours out the other nostril in a teacup. Vedic wisdom, netti pots and tea drinking…all finally in one gross-out conflation. 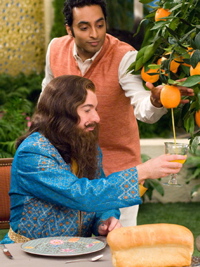 He schools the young Pitka (Myers), an American boy found by the gates of the ashram, in the “secrets of spiritual attainment” through games of stink-mop (bathroom humor finds new recourse) and the wearing of a chastity belt.

[If you find any of this outrageously insulting, don't see the movie. But that's about it, really. Of course it's juvenile...but what else could be expected from the man who brought us endless pissing scenes and ribald boob gags and schwinggg??]

Pitka is trained alongside a young Deepak Chopra, who later goes on to become the Deepak Chopra, #1 guru in America. Tired of his #2 slot, Pitka longs to overtake his rival and appear on Oprah, and a call from the Toronto Maple Leafs offers the chance to finally break ahead. Apparently the star player has a bad case of jitters after his wife left him for the L.A.Kings’ goalie, Jacques ‘Le Coq” Grande (Justin Timberlake, choking on a juicy role). All Pitka has to do is reunite the husband and wife, and the jitters will disappear, Oprah will beckon, and he can dethrone Deepak Chopra.

The movie is a hideous mash of Hari Krishna and hockey, but it’s all handled with affection and a light touch of mischief. It also sprints along so fast you don’t have time to get too bored or notice gaping plot holes, which, in this summer of two and a half hour vapidities (I’m looking at you, SaTC), is a small mercy in and of itself.

The spirituality presented (and gently mocked) here is really that of Deepak Chopra, he of the book for every emotion and occasion, the mercenary habit of slapping a trademark on every catchphrase, the strange intersection of spirituality, self-help and commerce. “As it says in my book” Pitka begins, shilling books such as If You’re Happy and You Know It, Think Again directly to the camera, to huge laughs from the audience. Acronyms are used as shorthand for catchphrases that are shorthand for genuine knowledge, all with an ever present TM. Myers nails Chopra’s accent, the distinctly rounded vowels, the slight sibilance that sounds the letter S more like a Z – “It iz very nize, izn’t it?” – so much so that when Chopra appears for a pivotal cameo and they speak to each other, the auditory resemblance is disorienting. Myers is friends with Chopra, so maybe Chopra has a better sense of humor about himself that I’d have credited him with. Pitka’s habit of explaining his own jokes had to come from somewhere.

Again, this is all so friendly and fluffy, Knocked Up looks like Grand Guignol and I found myself cheerfully hiccuping with laughter. There are two pretty awesome nods to Bollywood as well, starring Jessica Alba in a barely there sari, at least half the former cast of Bombay Dreams, high-pitched vocals badly dubbed (intentionally) for Alba, and on-purpose glitchy tape. That sounds awful, but the end result is really affectionate homage. In an entirely different sort of musical hat-tip, “Brimful of Asha’ by CornerShop plays over a rather exciting hockey montage. 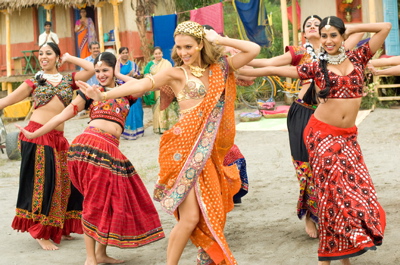 Manu Narayan, the star of the Broadway production of Bombay Dreams, plays Rajneesh, Guru Pitka’s Jeeves-like second in command/manservant. It’s a thankless role, but he gets quite a bit of screen-time so hopefully he’ll catch someone’s eye and land some decent gigs a la Naveen Andrews. Rounding out the great cast, Stephen Colbert plays a drug-addled sportscaster with his usual deadpan wit.

Despite a new character and milieu to mine, The Love Guru treads well-worn Mike Myers comedy terrain, one that is no longer so fresh. Verne Troyer shows up for no other reason than as a punch line for Keebler elves jokes, and Myers can’t quite keep Dr. Evil from creeping into his Pitka character. I’m pretty sure the movie will get panned, and whether an audience acclimating to Apotovian humor will stick around past opening weekend remains to be seen, but low-brow chuckles and cool air-conditioning go well with hot summer days so I wouldn’t bet against The Guru.