I really wish I could have been playing the new video game Grand Theft Auto IV this week. Unfortunately I don’t own a gaming system. I used to be an obsessive gamer as a kid so its best that I don’t go near one now that I have real responsibilities (like blogging). I can however, get my fix online. I’ve been trying my hand at a game that looks similar to GTA-IV. Instead of smacking hos and jacking cars, I’ve been learning about “my” rights as an immigrant child. The game is I.C.E.D. (I Can End Deportation): 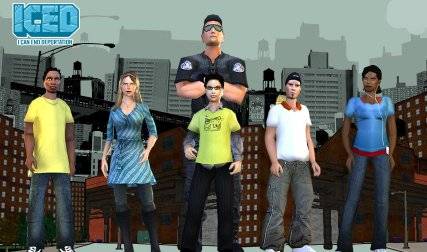 Breakthrough’s video game, ICED, puts you in the shoes of an immigrant to illustrate how unfair immigration laws deny due process and violate human rights. These laws affect all immigrants: legal residents, those fleeing persecution, students and undocumented people.

ICED has been featured in overwhelming amounts of press including: MTV News, Game Daily and has been covered on popular blogs including, Gothamist and The Huffington Post. To get a full list of media, please look at the left-hand tool bar.

How do you play?

Game Play:
As an immigrant teen you are avoiding ICE officers, choosing right from wrong and answering questions on immigration. But if you answer questions incorrectly, or make poor decisions, you will be detained with no respect for your human rights. [Link]

p>Is your knee jerk reaction that you think this game might exaggerate the plight of immigrant kids, especially those brought over by undocumented parents? Think again. More about that later, after the fold.

p>I picked the character of Suki to make my way through this cruel world: 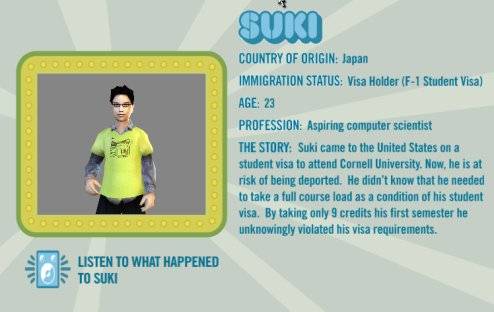 p>I tried to apply for a job at a restaurant (I needed money because I was hungry). They denied me because I didn’t have proper documents (I used forged ones). Then I tried to jack a car because I was feeling hopeless. I ended up in a detention center because of that. A man there offered to join me in the shower. Even in the video game detention was a pretty sad place and I ended up being deported. In real life it’s worse:

Another lawsuit against the Department of Homeland Security was filed in Federal court today [April 30th, 2008], this one is over prison conditions for detained immigrants. The plaintiffs are former detainees and several advocacy groups who say conditions in immigration prisons are wildly variable and too often inhumane. So, with help from Yale Law School, they’re asking a federal judge to force the government to create new regulations and hold itself accountable. WNYC’s Marianne McCune has more.

REPORTER: The harshest treatment of immigrants in detention has made big news in recent years: harassment by dogs at Passaic County jail in New Jersey; the death of an immigrant who went untreated for more than 20 minutes after suffering a hard attack in Louisiana; or the physical abuse of some immigrants held in Brooklyn after the September 11th attacks. But the lawsuit being filed today is more focused on the everyday. Paromita Shah of the National Lawyer’s Guild’s National Immigration Project says complaints range from inflexible visiting hours to inadequate medical care.

SHAH: Even today I had two calls from friends and family members who said this person had fallen down and he’d been taken to the hospital. But when he came back he said his back was swollen his leg was swollen. It’s been a week now and they haven’t checked up on him. He wasn’t sure what was happening, he was very agitated and he didn’t know what to do. [Link]

Some of these detention centers are run by corporations for profit. Yes, a subsidiary of Haliburton is involved in this business in case you even had to ask. More to come on this soon.