The news out of Myanmar/Burma keeps getting worse.

On Thursday evening the British paper The Sun is blaring the following headline: THE death toll in cyclone-ravaged Burma could hit 500,000 – more than TWICE the total killed by the Boxing Day Tsunami. The biggest problem right now is that the effort to fly in precious water and food are being thwarted by the paranoid military junta that runs the country and is too suspicious and inept to grant visas to aid workers: 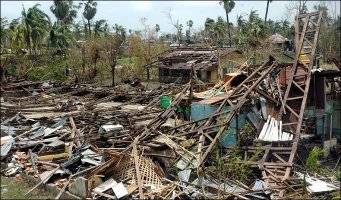 With up to 1.5 million people in Myanmar now believed to be facing the threat of starvation and disease and with relief efforts still largely stymied by the country’s isolationist military rulers, frustrated United Nations officials all but demanded Thursday that the government open its doors to supplies and aid workers…

“The situation is profoundly worrying,” said the United Nations official in charge of the relief effort, John Holmes, speaking in unusually candid language for a diplomat. “They have simply not facilitated access in the way we have a right to expect…” [Link]

p>The Tsunami was unimaginably bad…BUT at least the rest of the world wasn’t as impotent then as we are now. Considering the massive devastation in 2004, the world actually responded relatively quickly to minimize deaths after the actual event (certainly faster than the Hurricane Katrina response). This however, is just frustrating. Children are dying of thirst because visas aren’t being granted! For my part I am doing what I can. I found out that the relief organization CARE International was one of the first to have boots on the ground in Myanmar since they had an office there. They are actually disbursing aid. I also know that the first of the checks that our Uncle Sam is sending our way to help with the U.S. economic recovery will be hitting our bank accounts this week. I know it flies in the face of a sound economic strategy to send money meant to boost our economy straight overseas, but I’m willing to upset those “elite” economists. I just sent a chunk of change to CARE. I’ll just pretend there was no rebate. UNICEF is a good bet too.

p>Part of what is so aggravating about this situation is that India actually gave Myanmar a warning about the cyclone. If the junta had simply communicated that warning effectively then at least some lives could have been saved.

Indian meteorologists have said they had given neighbouring Myanmar 48 hours’ warning before a cyclone slammed into the country, killing more than 22,000 people and leaving over 40,000 missing.

The comments from the Indian Meteorological Department (IMD) came amid US allegations that Myanmar’s military junta failed to warn its citizens of the impending storm.

The department is mandated by the United Nations World Meteorological Organisation to track cyclones in the region.

“Our job is to give warnings and in advance, and we take pride in saying that we gave warnings much, much in advance and there was enough time to take precautionary measures such as evacuation,” he added. [Link]

Not only will untold thousands die in Myanmar, it will also virtually wipe out their precious rice exports sending already high prices even higher. Thus, to some extent, hunger will radiate outward from the Myanmar tragedy:

Cyclone damage to rice crops and inventories in Myanmar’s Irrawaddy delta and other areas may impair its exports of the grain in 2008 and further tighten the world rice market, the U.N. food agency said on Wednesday.

p>NASA has posted some satellite imagery which shows the region before and after the cyclone hit.

p>Just what is Than Shwe, the “leader” of Myanmar thinking? Unfortunately, he may be getting advice from his fortune tellers:

A fortuneteller’s warning that blood would spill in the city of Yangon prompted the general in 2005 to shift the country’s capital from there to Naypyidaw, a jungle outpost 300 kilometers (186 miles) inland, said Irrawaddy News, a weekly that covers Myanmar from Thailand….

“The amount of superstitious beliefs, the following of soothsayers make it difficult to understand why they act in a certain way,” said Christopher Roberts, a post-doctoral fellow at Singapore’s S. Rajaratnam School of International Studies who specializes in Myanmar politics. [Link]

If any readers have other suggestions for how one can aid the people of Myanmar, let’s here it.

31 thoughts on “Hell in the time of the Junta”