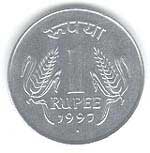 I’ve been watching with a mixture of excitement and unease this past year as the Rupee has edged up on the Dollar; earlier this spring, the Rupee/Dollar ratio reached close to 40:1 (right now it’s dropped back to about 41:1). Now, I understand this could have all sorts of implications for the Indian economy, some good (it’s a sign of a strong economy) and some bad (it could discourage foreign investment) — but I’d better leave it to the economists in the house to sort out “what it all means.”

What I’m interested in today is an entirely different kind of Rupee inflation, specifically the repurposing of Indian Rupee coins in eastern India. BBC reports that 1 Rupee, 2 Rupee, and 5 Rupee coins are being melted down and turned into razors, at which point they are smuggled into Bangladesh:

Police in Calcutta say that the recent arrest of a grocer highlights the extent of the problem. They seized what they said was a huge coin-melting unit which he was operating in a run-down shack.

The grocer confessed to melting down tens of thousands of Indian coins into razor blades which were then smuggled into Bangladesh, police said.

“Our one rupee coin is in fact worth 35 rupees, because we make five to seven blades out of them,” the grocer allegedly told the police. “Bangladeshi smugglers take delivery of the blades at regular intervals.”(link)

The problem is worst in West Bengal and Assam, which border Bangladesh. The BBC article describes some of the details of the problem — touts who buy coins operate with impunity right in front of the Reserve Bank where new coins are issued. And the coin depletion problem persists, even though the Mint has now reduced the metal content of the coins. (You can see a nice group of diagrams describing the constitution of the coins at the RBI website. 1 Rupee coins are made from stainless steel, while 2 and 5 Rupee coins are made of a copper-nickel alloy.)

Normally the metal in coins is worth less than the cost of melting them down and turning them into something else; it has to be that way, for the system to work. But apparently that’s no longer the case in eastern India. Indeed, unless the market in razor blades made from Rupee coins becomes saturated, causing the price of razors to drop, I can’t see how or why the current black market in coins should lose steam.

44 thoughts on “Rupees Are Worth A Lot These Days”