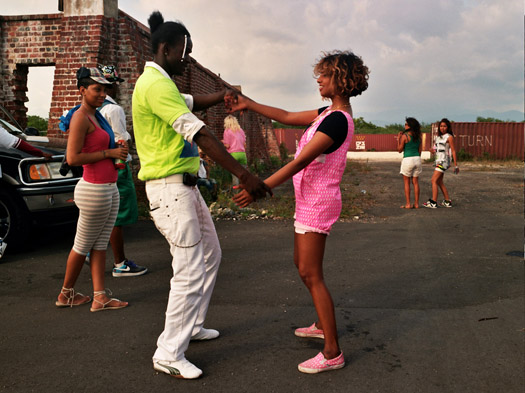 Who dat? Why, that’s your girl M.I.A., doin’ the damn thing in Jamaica during a video shoot last week; a tipster on the news tab blessed us with a link to this and several other photos from the shoot posted at hip arbiter Pitchfork Media. Apparently the sister’s new album, called Kala, drops in August; we’ve already gotten down to “Bird Flu” a few months ago, and now if you check the Pitchfork item you’ll find a link to a MySpace page that offers a stream of another new song (though not on the album), called “Hit That.” The topic is, um, exactly what it sounds like — a pure sex/party jam, containing interpolations of previous classics of the genre like Wreckx-N-Effect’s “Shake Your Rump.” Anyway make of the music what you will, but I’m digging the pan-Third World aesthetic that M.I.A.’s been putting forward of late in her videos and indeed, her choice of settings; she’s a reverse ambassador of mash-up globalization, bringing it back to its multiple sources, and the brown skins, big butts and ramshackle backdrops express a politics far more creative, democratic and satisfying than the tired and tendentious tigers of her first go-round.