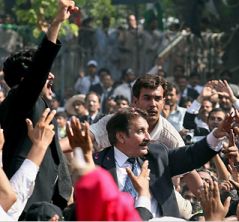 We’re starting to see real signs that Pervez Musharraf’s hold on power in Pakistan may not be absolute. Pakistan’s suspended Supreme Court Justice, Iftikhar Muhammad Chaudhry gave a speech in front of thousands of supporters in Lahore yesterday, expressing dissent with the current government. Chaudhry has been under house arrest in Islamabad since March, and it isn’t completely clear to me how he was permitted to address the public on the grounds of the Lahore High Court. But he’s clearly become a popular icon of secular dissent with Musharraf’s rule, and his speech has to be making authorities nervous:

Speaking to the crowd, including many lawyers, the suspended chief justice, Iftikhar Mohammad Chaudhry, said, â€œThe concept of an autocratic system of government is over.â€ He added, â€œRule of law, supremacy of the Constitution, basic human rights and individual freedom granted by the Constitution are essential for the formation of a civilized society.

â€œThose countries and nations who donâ€™t learn from the past and repeat those mistakes get destroyed,â€ he said.

He said the government had no right to impose laws that violated basic human rights.

Mr. Chaudhry spoke at the compound of the Lahore High Court, under the scorching Lahore sun. Seventeen judges from the Lahore High court also attended. Many of the supporters covered their heads with newspapers to escape the heat. Banners urging the independence of the judiciary and denouncing the president of Pakistan, Gen. Pervez Musharraf, hung on boundary walls surrounding the compound. Political workers, who were not allowed inside, listened to the speech outside the boundary wall. (link)

Chaudhry was also greeted by thousands of cheering bystanders on the side of the road between Islamabad and Lahore; the fanfare was so intense that what is normally a four hour journey took twenty-five hours!I briefly and irreverently mentioned this brewing crisis back in March, but a much more thorough analysis of the back-story of Justice Chaudhry’s dissent by Anil Kalhan can be found at Dorf on Law.

As Anil maps it out, probably the most important issue is actually Pakistan’s prosecution of the war on terror, specifically its policy of “disappearing” hundreds of people accused of being Al-Qaeda supporters. While Pakistan’s hunt for terrorists has resulted in some important catches, including especially Khalid Sheikh Muhammed, its growing dependence on authoritarian practices has become increasingly unpalatable to many Pakistanis. And the presumed cooperation between the ISI and the CIA, the latter with its secret detention facilities, has to be galling to both Pakistan’s secular liberals (they do exist) and the Islamists on the right.

There are other issues on the table too (human rights in Balochistan, and corruption surrounding the privatization of Pakistan Steel Mills), and Justice Chaudhry has apparently built up a reputation as an activist and a progressive over some years, as this detailed analysis suggests.

Of course, it’s an open question as to whether Musharraf will continue to let Iftikhar Chaudhry speek freely. And one has to wonder whether the feeling of dissent represented by the support for Justice Chaudhry can be transformed into an actual political movement in Pakistan.

As a final note, the following Faiz Ahmed Faiz ghazal was being played over the loudspeakers at Justice Chaudhry’s rally. The Times gave it to you in English, but because this is a desi blog I’m giving it to you in Urdu as well:

Hum Mehkumoon ke Paun Talay
Under the feet of the governed

Yes, Hum dekhain gai. That is probably about all that can be said at this point.

45 thoughts on “A Challenger in Pakistan”