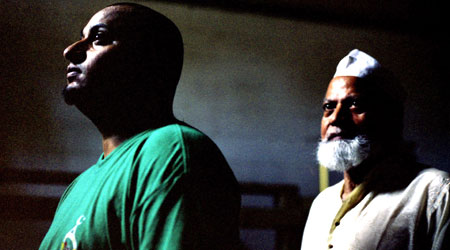 A Son’s Sacrifice is a 27-minute documentary about a halal slaughterhouse in Ozone Park, Queens, run by a Bangladeshi immigrant and his son, Riaz and Imran Uddin; the film, by Israeli-American Yoni Brook and Kashmiri-American Musa Syeed, who met while studying at NYU Film School, has just won Best Documentary Short at the 2007 Tribeca Film Festival. Beyond the clear Ibrahim/Abrahamic allusion, the title refers to son Imran’s decision, at age 27 and holding a degree in communications from Clark University, to return to Queens and take over the family business. From an article in the Queens Times-Ledger:

The film is not just about a live meat market, according to its makers. It is a metaphor for the immigrant experience. Brook described the proliferation of live markets in and around New York City as an act of defiance against assimilation. It is an opportunity for immigrants to allow their American-born progeny to experience directly the culture of home by witnessing halal ritual slaughter.

I don’t know that I’d call that “defiance against assimilation” — it might just be evidence of a different kind of assimilation or, since the whole idea of “assimilation” is both so imprecise and so loaded, maybe we should just be talking about the constant process of formation of metropolitan culture in the era of globalization. In any event, the film earned an item in yesterday’s New York Times, in which the reporter visits the slaughterhouse:

All these creatures had arrived from farms and had taken up temporary residence at the Madani Halal slaughterhouse on 94th Avenue near 100th Street in Ozone Park, Queens. An occasional feather drifted to the concrete floor, and a stillness pervaded the air. […]

Last week, the regulars drifted in, bypassing a large Pathmark on Atlantic Avenue for the quiet industrial side street where Madani sits in a squat red brick building. Most customers headed straight for the poultry. [Link]

In addition — and in an interesting bit of cross-promotion for the film, the slaughterhouse, and inter-community understanding — the producers held a “HalalFest” two Sundays ago:

To celebrate the films screening at the Tribeca Film Festival, the filmmakers threw a block party Saturday at the Madani Halal Live Lamb Goat and Poultry Market. Tables groaned with halal foods donated by local West Indian and Bangladeshi restaurants. Little girls lined up to get their faces painted and hands decorated with mehendi, or Indian body art. Kids flocked to a petting zoo while young men gathered for a pickup game of cricket on 94th Avenue. Live performances included music and dance from the Bangladeshi Institute of Performing Arts, Kashmiri-American band ZeroBridge, Guyanese singer Nadir, and hip-hop b-boy Fable Pabon and members of the Rock Steady crew. [Link]

I’m bummed I missed this! Did anyone here attend the event or at least get a chance to see the movie? Apparently it will be shown on PBS sometime later this year.

31 thoughts on “Halal in the Family”