In India an interesting debate has broken out over what exactly is secular and what is religious. In particular, can the government promote yoga?

At issue is a measure by the Hindu nationalist-led government of the state of Madhya Pradesh, in central India, that required public school students to practice the sun salutation and recite certain chants in Sanskrit during a statewide function on Thursday. The state government, controlled by the Bharatiya Janata Party, or B.J.P., said that it complied with a central government policy to encourage yoga in schools [Link]

The Chief Minister (pictured right) defended this as part of a broader a health initiative: 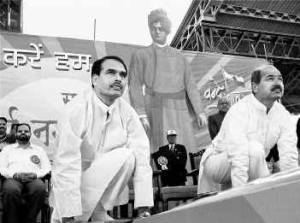 ‘The government was committed to creating awareness about yoga, which helps to keep the body and mind in good health,’ …The yoga policy envisages constitution of a council for practising yoga in the state, provision of facilities required for setting up yoga centres, selection and appointment of yoga teachers. [Link]

p>However, minority groups did not see this as innocuous:

The “Suryanamaskar” programme came under attack from minority communities and opposition parties who had dubbed it as “an effort to saffronise education.” The ruling BJP was trying to “incite religious passion under the garb of yoga” among school children, a spokesman of the Catholic Church of Madhya Pradesh said. [Link]

In particular, they took issue with the use of Hindu mantras:

Muslim and Christian groups in the state took issue not so much with the yoga exercise, but with the chants, which they said were essentially Hindu and in worship of the sun. They argued in court on Wednesday that it violated the Indian constitutional provision to separate religion and state. [Link]

On Wednesday, the court agreed with the plaintiffs, ruling that “neither the chants nor the sun salutation could be forced on students. [Link]” The MP government has responded by saying that the whole event was voluntary in the first place, but even this remains problematic as it would create a major public event from which non-Hindus would be discouraged from attending.

We’ve blogged before about how Christians in the US are concerned about Yoga, but this story reminds me more about the “War over Christmas” than anything else. It feels like the kinds of debates we have in the US about the suitability of Christmas carols for public events, or for Christmas trees for public spaces. Even in India, certain aspects of Yoga occupy a space between public and parochial.

While I do believe that Yoga can promote health, I think that the impact of doing a quick Surya Namaskar is pretty miniscule. This means that the state is either being transparently cynical, or various ministers believe in the almost mystical powers of yoga to produce health over and above the component physical movements. If it’s the latter, perhaps the opponents of this program ought to respond with some laughing yoga instead

113 thoughts on “Greetings and salutations”