Last January I posted a link to an online test that you can take, which supposedly reveals if you have even a subconscious racial bias. One of the researchers conducting the study was Harvard’s Mahzarin Banaji. Banaji and her colleagues have just revealed results from their latest set of experiments which, if true, corroborates what many of us have suspected about politics. I love a bit of controversy on a Monday. From the Washington Post: 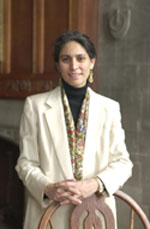 The field of social psychology has long been focused on how social environments affect the way people behave. But social psychologists are people, too, and as the United States has become increasingly politically polarized, they have grown increasingly interested in examining what drives these sharp divides: red states vs. blue states; pro-Iraq war vs. anti-Iraq war; pro-same-sex marriage vs. anti-same-sex marriage. And they have begun to study political behavior using such specialized tools as sophisticated psychological tests and brain scans…

Emory University psychologist Drew Westen put self-identified Democratic and Republican partisans in brain scanners and asked them to evaluate negative information about various candidates. Both groups were quick to spot inconsistency and hypocrisy — but only in candidates they opposed.

When presented with negative information about the candidates they liked, partisans of all stripes found ways to discount it, Westen said. When the unpalatable information was rejected, furthermore, the brain scans showed that volunteers gave themselves feel-good pats — the scans showed that “reward centers” in volunteers’ brains were activated. The psychologist observed that the way these subjects dealt with unwelcome information had curious parallels with drug addiction as addicts also reward themselves for wrong-headed behavior.

Another study presented at the conference, which was in Palm Springs, Calif., explored relationships between racial bias and political affiliation by analyzing self-reported beliefs, voting patterns and the results of psychological tests that measure implicit attitudes — subtle stereotypes people hold about various groups.

That study found that supporters of President Bush and other conservatives had stronger self-admitted and implicit biases against blacks than liberals did.

Not so fast, say a few expected critics.

Brian Jones, a spokesman for the Republican National Committee, said he disagreed with the study’s conclusions but that it was difficult to offer a detailed critique, as the research had not yet been published and he could not review the methodology. He also questioned whether the researchers themselves had implicit biases — against Republicans — noting that Nosek and Harvard psychologist Mahzarin Banaji had given campaign contributions to Democrats.

“Obviously, such research does not speak at all to the question of the prejudice level of the president,” said Banaji, “but it does show that George W. Bush is appealing as a leader to those Americans who harbor greater anti-black prejudice.”

And the parting shot:

Jon Krosnick, a psychologist and political scientist at Stanford University, who independently assessed the studies, said…”If anyone in Washington is skeptical about these findings, they are in denial,” he said. “We have 50 years of evidence that racial prejudice predicts voting. Republicans are supported by whites with prejudice against blacks. If people say, ‘This takes me aback,’ they are ignoring a huge volume of research.”

22 thoughts on “Are you a biased voter?”