Indian soldiers in WWI were remembered at a reopened German graveyard today:

Until recently there was nothing to identify the quiet, leafy spot where Jafarullah Mohammad and Mata Din Singh were buried. The two servicemen were among thousands of Indian volunteers who fought for Britain in the first world war, and were captured at sea or on the western front.

For more than 80 years the German graveyard where Mohammad, Singh and 204 other Indian volunteers are buried was forgotten. But today the war cemetery in WÃ¼nsdorf, in a forest 40km south of Berlin, is to be officially reopened… Diplomats from India, Pakistan and Bangladesh will attend today’s rededication ceremony…

The restoration is a recognition of the role played by troops from undivided India, who fought in the bloody battles of Ypres, Neuve Chapelle and Loos. Many died. Others ended up interned in German prisoner of war camps. “Very few people are aware of the role Indian troops played in both world wars,” Peter Francis of the Commonwealth Graves Commission said. “In some Indian units the casualty rate was 80%. In three days’ fighting in Neuve Chapelle in 1915, for instance, some 4,200 Indian soldiers perished…” [Link]

p>Fewer still care to remember those who fought in the second great war on the other side, to evict the British. The ally in that cause was… inconvenient: 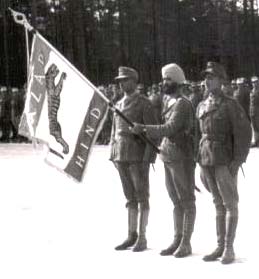 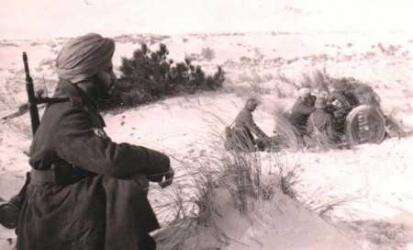 p>Update: Earlier this week, Tehran honored these soldiers as well (thanks, O’Ya and GGK):

About 3,500 Indian soldiers who died fighting for the British in Iran have been commemorated in an official ceremony in Tehran… Buglers were flown in from India to play the Last Post for the thousands of forgotten soldiers who died here. Wreaths were laid in a Commonwealth war cemetery, although only 10 Indian soldiers have gravestones here. The rest were buried or cremated where they fell on the battlefield, though their names are recorded on stone plaques…

For the tiny Indian community in Iran it was a surprise to find so many of their countrymen had died here. MH Sawhney’s father fought for the British in Basra in the First World War and then settled in Iran as a businessman. [Link]

37 thoughts on “Laying the ghosts of war to rest (updated)”