And maybe one day the twain shall meet and produce a decent film.  I’m not holding my breath, though.  The Hindustan Times reports on a recent spate of Bollywood/Hollywood joint ventures.  First up is Mumbai-based Percept Pictures, which recently announced plans to co-produce Ram Gopal Verma’s first “exclusively American” film, entitled Within:

The English-language film will reportedly be set in a Manhattan apartment peopled only by American characters.

Within will obviously be a significant first for RGV, but it is likely to be quickly followed up with Ek, a sweeping espionage thriller featuring Amitabh and Abhishek Bachchan with a clutch of Hollywood actors. [link] 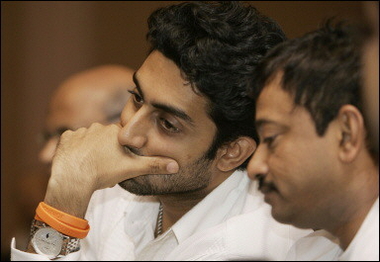 A Manhattan apartment peopled only by American characters?  Do they have to pass a citizenship exam to enter the building?  According to Verma, “Within will revolve around the fear factor that is present within each one of us, while Ek will be based on nuclear terrorism.”  I personally had no idea that a “fear factor” was present within me.  I hope it doesn’t make me eat cockroaches or something.  Verma said that casting has yet to be finalized, and did not name the Hollywood actors involved.  Will he be able to land a Hollywood heavyweight like Ali Larter? 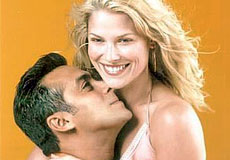 Larter’s film Marigold, which some of you may remember as last year’s Holly/Bolly collaboration of the moment, starring shirtophobe Salman Khan, is apparently scheduled for release in February.  If the unconfirmed but irresistible gossip of the Calcutta Telegraph is to be believed, Khan’s performance impressed the director enough to land him a second job:

William Carroll, director of Salman Khan starrer Marigold, has cast our favourite compulsive undresser in his forthcoming project, a Wizard of Oz remake aimed at teenagers. Khan is rumoured to be playing one of Dorothy’s companions on the yellow brick road. [link]

p>As if the prospect of watching Manhattanites eat cockroaches in their apartment while the Bachchans pÃ¨re and fils save the world from nuclear terrorism as Salman Khan sings “If I only Had a Brain” weren’t enough, Sanjay Leela Bhansali will also be joining the international party:

In yet another extremely significant development, Sony Pictures has decided to produce Sanjay Leela Bhansali’s next film, a teen love story titled Saawariya. Indications available so far suggest that the film will be a typical Bhansali product – unabashedly melodramatic and riotously colourful. [link]

p>A collaboration between the man who brought us Devdas and the studio that brought us Deuce Bigalow:  European Gigolo?  I for one am intrigued.  But wait, there’s more:

Among the several Indo-US co-productions already in the pipeline, Manish Gupta’s Karma, Confessions and Holi looks fair to be the one that will be the first to hit the screen.

Being produced jointly by Saregama Films and Hollywood’s Drena De Niro (superstar Robert De Niro’s adopted daughter), Karma is about four New York couples that meet on weekends to share their innermost feelings with each other as their jaded relationships amble through nothingness.

Karma has three sets of characters – fresh-off-the-boat Indian migrants, born-in-the-US Indians and White resident Americans. Manish Gupta, a New York-based IT software professional-turned-filmmaker who debuted with Indian Fish in American Waters, is of course working with a mix of Indian and American actors on the new film. [link] 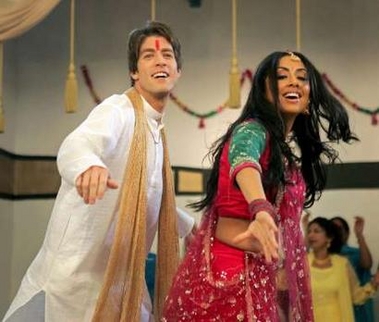 If listening to 3-4 self-absorbed couples talk about their jaded amble through nothingness doesn’t sound like your cup of American chai, there’s also the first film from the American Pride Films Group.  Attentive Mutineers might remember that American Pride is the production company of former GOP babe of the week Namrata Singh Gujral.  Their first film, Americanizing Shelley, is currently shooting.  The film’s press release suggests that the movie will break new ground in its reliance on cliches:

Successfully blending the old and the new with the east and the west. in a “Pygmalion”- like contemporary romantic comedy, “Americanizing Shelley” takes place in Los Angeles and tells the story of a wanna-be Hollywood talent manager, who sets out to Americanize an Indian girl straight from the Himalayas. As he creatively teaches her all about the American way of life and what it takes be a Hollywood celebrity, he untimely ends up learning a thing or two about his own life. Their clash in cultures soon gives way to understanding, unity and love as they begin to see the world through each others eyes.

The film will also boast an elaborate Bollywood wedding scene as well as a traditional Indian inauguration ceremony conducted by a Hindu priest. [link]

Looking at the embarrassment of cinematic riches that Bolly/Hollywood has in store for us, I must admit that I feel, well, slightly embarrassed.

54 thoughts on “East is East, and West is West”