With pathetic regularity, a handful of delusional losers lived out their role-playing fantasy once again. We liked them better when they were living in mom’s basement, unemployed and pimply with their bidis, bhang and their 12-sided dice. ~50 dead and rising.

The first blast was reported at around 5.40 pm from the crowded Paharganj area, popular with foreign backpackers, and among the most congested areas in central Delhi close to the New Delhi Railway Station. The other explosion occurred soon after in Sarojini Nagar, another busy shopping area in south Delhi, popular among the middle class and even foreigners. Soon after there were reports of similar blasts from a few other areas, including Govindpuri, also a teeming market, in south Delhi.

“There was a huge explosion and the walls of a number of buildings came crashing down,” said Arun Gupta, secretary of the All Delhi Hotel Association. “It was so powerful the whole market started shaking,” added Gupta, who said he was barely 100 metres away from the blast spot at Pahargunj that was full of foreign tourists that throng its budget hotels and innumerable internet cafes…

The third blast occurred near the Kalkaji depot in Govindpuri, another extremely congested area… An official of the brand new Delhi Metro said the trains were running normally and commuters were being thoroughly frisked before entering the stations. [Link]

… [Paharganj] is outside the New Delhi railway station and is popular with travelers. Witnesses said that a woman and her infant were among the dead, as was one of the betel nut vendors who haunt the city’s markets… Mr. Chawla said he saw six or seven women lying on the ground, including one whose sari had caught fire. He grabbed bedsheets from a nearby vendor and used them to douse the flames. [Link]

Preliminary reports said that just about an hour ago, police had received a call about a bomb placed in a bag in the Paharganj area. But before the police could get to the place, the explosive went off. [Link] 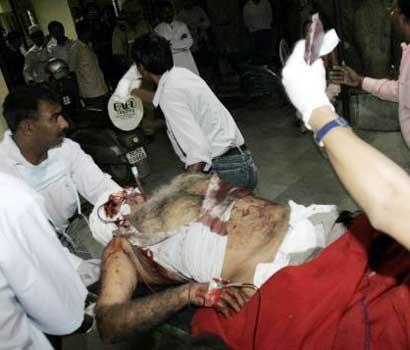 The bus was travelling on the Outer Mudrika route when an unidentified man entered the bus from the Kalkaji Mandir stop. Later a passenger saw an unclaimed bag under a seat and alerted the driver Kuldeep and the conductor Budh Prakash. The driver stopped the bus and on checking he found explosives inside it. The driver and the conductor carried the bag outside the bus and threw it away which exploded immediately on landing. [Link]

The police also recovered a bomb from a bank in the Chandni Chowk area, which was defused by the bomb squad immediately. [Link]

Security was stepped up at important locations like the US and Israeli consulates, the American Centre in the Cuff Parade area, the government secretariat at Nariman Point in south Mumbai and Shiv Sena chief Bal Thackeray’s residence in the western suburb of Bandra, officials said.

The elite anti-terrorist squad was providing security covers for all these locations as well as religious places like the Siddhi Vinayak Temple in central Mumbai’s Prabhadevi area. Additional barricades and sand bunkers have been installed to foil any attempt by suicide bombers, officials added. [Link]

In August 2003, car bombs a few minutes apart in a crowded bullion market and outside a hotel in India’s financial capital of Mumbai killed at least 44 people.

In 1993, a dozen explosions — including blasts at the Mumbai stock exchange, Air India’s Mumbai headquarters and the Centaur Hotel — killed more than 250 people and injured 500. [Link]

79 thoughts on “Bombs bay in Delhi”