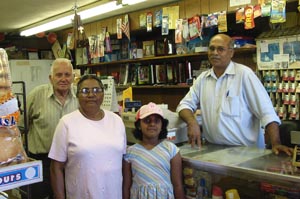 Since the Indian restaurant next door to my apartment went out of business, I’ve been coming home to find unclaimed stacks of Little India magazine strewn all over the sidewalk.  While stepping over a copy the other day, I noticed the cover story:  “Only U.S. Town with an Indian Majority.”  Naturally, I was curious.  Where is this town?  In the Bay Area?  Jersey?  Or is it in the great state that brought us weather-forecasting groundhogs and chipped ham?  (The answer is #3.)

Millbourne is a tiny Pennsylvania borough with an estimated population of 994.  At the time of the 2000 Census, Indian-Americans constituted 40% of its population; current “Little India projections” bring that number up to 63%, compared with a national average of less than 0.6%.

The 2000 Census outlines the broad contours of Millbourne’s Indian community. The gender breakdown is about even: 53 percent to 47 percent women. Five percent are mixed race. The median age of the Indian community is 32. Only 13 percent of the Indians are native-born. Almost two-thirds migrated to the United States within the previous decade. Like the other residents of the city, Indians in Millbourne are principally blue collar. The median household income for the 102 Indian households in the borough was $36,000, higher than the borough average, but substantially below the national median Indian household income of $64,000. However, only 7 percent of the Millbourne Indians were below the poverty line, as opposed to 9 percent of Indians nationally. Just 10 percent of Indians in the borough owned their home, which is less than a quarter of the home ownership rate among Indian Americans nationwide.

Millbourne lies adjacent to the city of Upper Darby, pop. 81,000, and is a 10-minute train ride from Philadelphia.  The town is so small (0.7 sq. miles) that it lacks its own school system, movie theater, or Starbucks, but it does boast a gurudwara, a Keralite church, and a small mosque.  Millbourne’s first Indian residents came from Kerala:

The earliest Indian immigrants to settle here were nurses from Kerala, who had been sponsored for jobs at area hospitals. Soon their husbands and children followed, establishing themselves in this small, very affordable town.

“This is true for majority of the cases where the wives first came to the country as nurses,” says John Kurichi, whose family was among the first Keralite family to settle in Millbourne in 1979; his wife has been a nurse for 27 years. He believes his was the first Indian family to move into the area; many other families with links to Kerala followed. The families are members of the Malayalee Association of Delaware and the community keeps connected through the St. Gregorios Malan Kara Orthodox Church, which has a pastor from Kerala.

The predominant subethnic group in Millbourne is, without a doubt, Sikh, accounting for, according to some, as much as 80 percent of the Indian population. It is home to the Sikh Gurudwara and the Philadelphia Sikh Society, which is the nucleus and the reason for the expanding community.

Millbourne experienced a population surge from New York after 9/11. Many Sikh families abandoned New York in the wake of the terror attacks and racial profiling and took refuge in this small community where the gurudwara was their beacon and anchor, and all around them were people of their color and beliefs.

p>Among other things, some of Millbourne’s residents may be responsible for your next airline meal:

Some four miles away is Jyoti Cuisine India, which manufactures Indian meals in Sharon Hill, as well as canned goods and ready to eat entrees that are sold in natural food stores like Whole Foods. The company has been producing natural vegetarian food since 1979 and currently provides the hot meals served on board Continental, British Airways, Emirates and US Airway flights. Their automated facilities require only 15 workers, but ten of them are Sikh women from Millbourne, who catch the bus daily to the plant.

According to Sunil Manchanda, business manager at Jyoti Foods: “Ours is basically Indian food and these women know what Indian food is all about. Some work on the cooking, making matri or gulab jamun or parathas and rotis for the airlines.

Millbourne seems to have a lot going for it: low crime, good community relations, close proximity to the big city, and one selling point that seems too good to be true to this Bay Area resident:

ItÂ’s still possible to get a three-bedroom house with a patch of green for under $100,000.

With real estate prices like that, IÂ’m starting to think that MillbourneÂ’s next resident may be Sri Lankan.