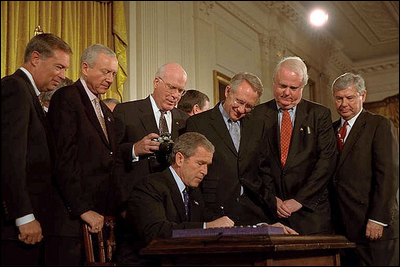 Passed by the U.S. Congress after the September 11, 2001 Terrorist Attacks, the (Patriot) Act enhances the authority of U.S. law enforcement for the stated purpose of fighting terrorist acts in the United States and around the world. This enhanced legal authority is also used to detect and prosecute other alleged potential crimes. Among other laws, the USA PATRIOT Act amends the Foreign Intelligence Surveillance Act (FISA).

Among the laws the PATRIOT Act amended are immigration laws, banking and money laundering laws, and foreign intelligence laws…

Critics claim that some portions of the Act are unnecessary and allow U.S. law enforcement to infringe upon free-speech, freedom of the press, human rights, and right to privacy. Much controversy has arisen over section 215, which allows judges to grant government investigators ex parte orders to look into personal phone and internet records on the basis of being “relevant for an on going investigation concerning international terrorism or clandestine intelligence activities”, rather than probable cause as outlined in the fourth amendment.

I feel safer. Don’t you?