Beads of Paradise is a small furnishings shop by Union Square in Manhattan. Earlier this year, it sold random old photos of a Rajasthani family for six hundred bucks as nothing more than visual texture for interior design. This struck me as comical. Now they’re selling Hindica for the same purpose: 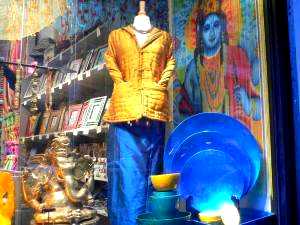 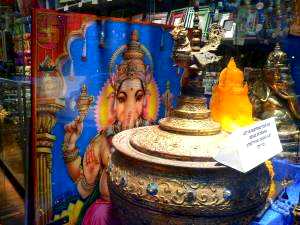 The most egregious in this vein is actually ABC Home, a giant imports store down the street (Moroccan lanterns go for thousands) with expensive Krishna and Nataraja icons in its sidewalk displays.

Religion and art are closely linked, of course; churches in Italy feel to me like shared art galleries. But you generally won’t find secular furnishings stores in the U.S. selling pricy Christian icons because of the disrespect that implies. On the flip side, you can get Ganesh idols at many stores in Jackson Heights, but most of those selling anything larger than a keychain are religious artifacts shops. New Jersey has elevated the metallic dashboard Ganesh to an art form.

Those are all ancillary issues. The real question is this: why do high-end import stores in Manhattan prominently feature Hindu iconography when they have very few Hindu customers? One, because after the ’60s, it’s become a shorthand for ‘exotic.’ It’s a quick way to differentiate from mainstream furnishings stores. Two, because it’s colorful and pretty to look at. That’s actually a bit of a compliment.

Nowhere in those commercial and aesthetic calculations does the concern pop up that there actually are Hindus in Manhattan. That’s why they feel comfortable putting Ganesh in the window instead of something secular like an inlaid ivory table. It’s like ’65 never happened. 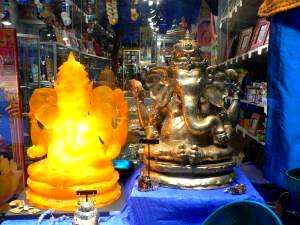 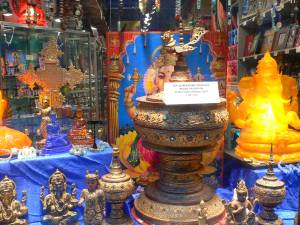