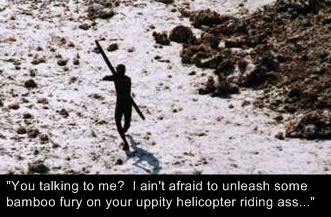 Noone ever said technological progress was either monotonic or pareto optimal. This old, but somehow overlooked article from MSNBC gives us one fascinating case – a group of island dwellers right smack in the path of last December’s tsunami who nevertheless emerged with most of their, uh, possessions, pretty much intact –

PORT BLAIR, India – Two days after a tsunami thrashed the island where his ancestors have lived for tens of thousands of years, a lone tribesman stood naked on the beach and looked up at a hovering coast guard helicopter.

He then took out his bow and shot an arrow toward the rescue chopper.

It was a signal the Sentinelese have sent out to the world for millennia: They want to be left alone.

The Sentilese and their close cousins the Andamanese, Onges, Jarawas, and Shompens are Stone Age throwbacks who live on an island chain in the Indian ocean. Despite being just north of quake’s epicenter, the tribes appeared to have survived the tsunami relatively intact. The secret to their survival? Living close to the land perhaps –

…Government officials and anthropologists believe that ancient knowledge of the movement of wind, sea and birds may have saved the five indigenous tribes on the Indian archipelago of Andaman and Nicobar islands from the tsunami that hit the Asian coastline Dec. 26.

“They can smell the wind. They can gauge the depth of the sea with the sound of their oars. They have a sixth sense which we don’t possess,” said Ashish Roy, a local environmentalist and lawyer who has called on the courts to protect the tribes by preventing their contact with the outside world.

…The tribes live the most ancient, nomadic lifestyle known to man, frozen in their Paleolithic past. Many produce fire by rubbing stones, fish and hunt with bow and arrow and live in leaf and straw community huts.

Ashish Roy seems to credit Jedi powers for saving them from the tsunami but I’m inclined to an explanation more akin to Gilligan’s Island. Not having to worry about projectile 2×4′s, getting trapped in concrete structures, or being hit broadside by an automobile swept up in the currents probably contributed mightily. Not to mention the lucky break that the island did not end up submerged in its entirety.

I suppose there’s a certain Romance to the idea of loincloth-clad, nomadic villagers living lives uninterrupted by Blackberry’s, jet travel, designer clothing, vaccines, reliable food sources, and the like. Still, I’m reminded of a Desi dude I knew in school who hated the idea that “fate” had consigned him to someday taking over the hotel business his father had built. Ha! If he only knew that over here, we’ve got desi’s relegated to the same muddy fishing holes their great (x100) grandfathers first pioneered. Talk about a future pre-ordained.

The government has banned interaction with the tribes, and even taking their pictures is an offense. Many tribe members have visited Port Blair, capital of the Indian-administered territory, and a few Great Andamanese and Onges work in government offices.

Outsiders are forbidden from interacting with the tribesmen because such contact has led in the past to alcoholism and disease among the islanders, and sexual abuse of local women.

“They have often been sexually exploited by influential people — they give the tribal women … sugar, a gift wrapped in a colored cloth that makes them happy, and that’s it,” said Roy.

[previous SM coverage of the Andamans and Onges here]

14 thoughts on “Knock your butt back to the stone age”