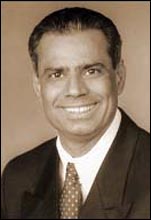 Upendra Chivukula, who in 2002 became the first Indian American elected to the New Jersey assembly, is running for re-election.  New Kerala.com reports:

Chivukula, currently serving his second term in the New Jersey State Assembly, hopes his track record on how he has helped his district while in office will get him re-elected.

“I have brought $4.9 million into the district to provide aid to various municipalities; the various legislations I have sponsored, some in process, such as prompt-pay laws for healthcare providers to compensate, better definition of customer care so that insurance companies cannot escape their responsibilities.

This is a work in progress. You keep working on it,” said Chivukula, the Indian American who has sponsored a Science and Technology Caucus in the state legislature and was instrumental in establishing the World Languages and International Studies Caucus.

“The most important issue facing people are property taxes and how to provide relief,” Chivukula, who has also expressed interest in running for the US House of Representatives in November 2006, told IANS.

“Number two is how to make healthcare affordable and providing access to healthcare.” 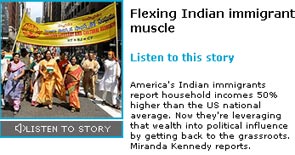 Methinks this is the wrong political environment in which to focus on priority number one, so maybe he will concentrate instead on number two, which deserves more attention anyways.

p>American Public Media’s radio show Marketplace did a story this past Thursday on Chivukula, which also featured Congressman Bobby Jindal (thanks for the tip Manan).  The ~4 minute story discusses the rise of political muscle within the Indian American community.  In the story, Chivukala tells the reporter that even though his last name is difficult for most Americans to pronounce, he thinks he can get elected.  To paraphrase, he tells her to, “just think if you drive a Chevy and drink a Cola.  Then put them together and you have Chivukula.”

p>Though he is running for State office, as mentioned above Chivukula has a committee that is exploring his bid for the US Congress. Called “Chivukula for Congress” the committee also has a website (which I can’t find).

“That is a long-term plan. A lot of times opportunities come and you have a window of opportunity. So you have to be ready for it. I’m getting ready for the Congressional run for the House seat when the opportunity presents itself,” he said.

US Senator Frank Lautenberg will be 84 years old soon and observers say he may choose not to run for office again. In that case, US House Representative Rush Holt has indicated he will run for the seat Lautenberg lets go. That would leave a House seat open, one that Chivukula may try for in 2006.

47 thoughts on “As American as a Chevy or a Cola”