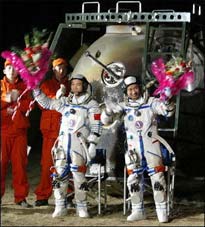 For today’s edition of Science Friday here on SM, I thought I would write about the science story that made the biggest impact in this past week, as well as the one closest to my heart.  The theme of this week’s Science Friday will be Human Space Exploration.  What are countries around the world, including the U.S., India, and China doing in order to keep their societies at the forefront of space technology?  The “prestige” of nuclear weapons pales in comparison to the prestige and society-wide benefits that a country gains on the road to putting its citizens in space.  Anyone can make nukes, but only three countries (U.S., Russia, and China) have the economic power and human capital to put people into space and return them safely.

China continued its impressive run by following up its first human mission with this second one that placed two men is space for five days (the equivalent of our Gemini Program from the 60s).

Chinese astronauts Fei Junlong and Nie Haisheng, known as taikonauts, were declared to be in “fine condition” after their 5-day spaceflight which ended at 4:33 a.m. Monday, Beijing time. The mission, lasting 115 hours and 32 minutes, was more than five times longer than China’s maiden manned mission in 2003.

“We feel fine,” Fei told a crowd of well-wishers. Nie expressed thanks to the Chinese people for their “concern and support.”

Wu Bangguo, No. 2 in the Communist party hierarchy and head of the country’s national legislature, was quoted by Xinhua as saying the second manned space mission was a “complete success,” and a “milestone” in China’s space technology development. [Link]

What about India?  Is it even trying to keep pace with its ambitious neighbor?

… as China begins planning a lunar mission in 2007, and with the US and India declaring an interest in another Moon landing – and a manned flight to Mars – are we seeing the dawn of a new space race?

p>While India’s space programme is relatively small, it has made considerable strides in recent years, putting a number of satellites into orbit. [Link]

That ain’t going to cut it.  When it comes to a proper space race, “relatively small” and “considerable strides” are girly-man words.  With a space race you have to go big or go home.  In 1998 my dad used some connections to get us a tour (highly illegal) of a major ISRO facility in India.  What I witnessed were intelligent and enthusiastic scientists with antiquated computers, mired in an unworkable bureaucracy.  Without a bold and focused vision, India won’t be able to compete with China, and given 21st century warfare, the strategic implications of that may end up being more dire than not having as many nukes.  A lack of vision is the same reason that NASA here in the U.S. withered throughout the 80s and 90s only to see a recent resurgence.  With no competition, vision usually fades.  It wasn’t until the last few years that the Bush Administration decided to turn things around with a focused and ambitious plan to send humans back to the Moon and then on to Mars.  They realized that re-vitalizing the space program was a necessity and that the military spin-offs might come in handy.  If China could do things in space that we couldn’t, it would be a strategic blunder of epic proportions.  The future of warfare unfortunately includes space.  That is as certain as Manifest Destiny once was.  Let me briefly explain.  U.S. combat operations increasingly rely on communications and theater awareness.  The U.S. can kick ass because we always have more information than our enemy.  This information is a direct result of our orbital assets.  If a foreign power can eliminate or disable those assets at a critical moment, then we would be blind, deaf, and dumb.  A hunter-killer spacecraft could simply fly near an enemy satellite and deploy a sun-shield.  Starved of  the solar rays the provide energy, the satellite would go into safe-mode and shut down.  Imagine if China could do something like this to U.S. or Indian military communication satellites. There are even easier ways to disable spacecraft. 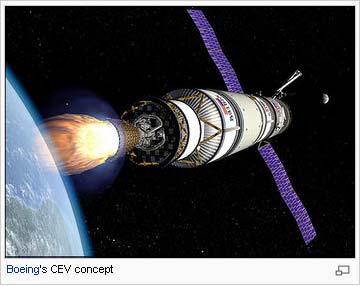 A space race also inspires the citizens of a country to study science and engineering at their Universities, especially in graduate school.  Everybody wants to be part of something so big and inspiring if the government gets behind it as China has.  In the U.S., enrollment of our citizens in engineering schools is dangerously low.  We are training engineers from other countries who are increasingly returning to their country of origin.  Our country must remain the leaders in scientific and technological innovation if we want to compete in the new global economy.

So what is the plan here in the U.S.?  Right now we do not have the infrastructure to send humans to the Moon.  We must put that infrastructure in place before Red China does.  It all comes down to the launch vehicle.  The Saturn V that we used for the Apollo Program could deliver ~120,000 kg to LEO (Low Earth Orbit).  Current launch vehicles can’t get anywhere near that.  The U.S. government will never allow us to build another Saturn V.  Why not?  Because it wouldn’t have any commercial customers.  We would spend billions of dollars to develop a vehicle that only the government would use.  Fiscal conservatives don’t like that philosophy.  China doesn’t need to worry about fiscal conservatives.  So instead we are going to do what we did during Apollo, but with multiple launches of smaller rockets which contain pieces that we will assemble in orbit, before sending to the Moon.  The centerpiece of this new plan, and the replacement for the shuttle, is the Crew Exploration Vehicle (CEV).  I could show you my original concept for the CEV from three years ago but then I’d get into a lot of trouble

, so instead I am showing you Boeing’s concept.  The capsule is similar to the one used in Apollo only larger (can seat 4 for a lunar mission and possibly 6 for a Mars mission).  In LEO it performs a rendezvous with a lunar injection stage full of fuel and then blasts off toward the moon.  Winged-vehicle designs like the Space Shuttle were eliminated because they are less safe, cost more to maintain, and are more expensive to develop.  The fact that this design was chosen reiterates in my mind that we are in a race.   We want to get back to the moon quickly and efficiently instead of impressively.

In any case, all this serves as a brief introduction.  What I really want is for readers to either point to or discuss other science stories pertaining to the global space race, space exploration, or space science.  If anyone has any more insights into ISROs plans, that would be particularly welcomed.

In the past five years, an Apollo Hospitals facility in southern India has treated 1,700 patients using a satellite technique called tele-medicine. This process uses video cameras in rural clinics to hook up patients to doctors located hundreds of kilometers away.

The space program costs India almost $600 million dollars a year, but space scientists believe it’s an investment that benefits the lives of millions of the country’s residents. [Link]

48 thoughts on “The Final Frontier”