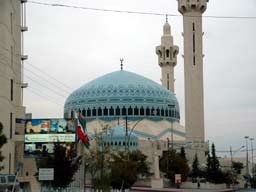 Sunset today marked the beginning of Ramadan for millions of Muslims around the world.

Muslims believe that during the month of Ramadan, Allah revealed the first verses of the Qur’an, the holy book of Islam. Around 610 A.D., a caravan trader named Muhammad took to wandering the desert near Mecca (in today’s Saudi Arabia) while thinking about his faith. One night a voice called to him from the night sky. It was the angel Gabriel, who told Muhammad he had been chosen to receive the word of Allah. In the days that followed, Muhammad found himself speaking the verses that would be transcribed as the Qur’an.

At many mosques during Ramadan, about one thirtieth of the Qur’an is recited each night in prayers known as tarawih. In this way, by the end of the month the complete scripture will have been recited.

Muslims practice sawm, or fasting, for the entire month of Ramadan. This means that they may eat or drink nothing, including water, while the sun shines. Fasting is one of the Five Pillars (duties) of Islam. As with other Islamic duties, all able Muslims take part in sawm from about age twelve. [Link]

I thought that I would share the story of my first Ramadan to mark the occasion here on SM. To me Ramadan was nothing but a word and a vague concept until three years ago.  I had read about it in books and had Muslim friends explain some of the traditions to me, but as a non-Muslim, unless you live in a Muslim country or near Detroit, I think it is difficult to really understand the feeling of Ramadan.  In November of three years ago I landed in Amman, Jordan just hours before sunset on the first full day of the holy month.  I had never stepped foot off a plane in an Islamic country before and I was excited to begin my adventure, in addition to being a bit nervous.  My destination lay approximately three hours south near the ancient ruins of Petra.  I stepped outside and looked for a cabbie that could speak some English.  I asked him if he could drive me to south to Petra.

The Sun was hanging low in the sky as we left the airport.  Minutes later the cabbie was anxiously fumbling around with his hand in the glovebox.  A pack of cigarettes lay inside.

“Have one,” he said as he lit the cigarette already in his mouth.  He had a bit of the shakes I remember thinking.  “I can’t smoke all day,” he explained to me.

Ahhhhh.  I remembered that nothing is supposed to pass your lips during the day.

“Here, take take, I will light for you.”  Frequent travelers understand that the whole world thinks Americans are prudes for not lighting up as often as they do.  I fancy myself as part of the old school though, one who partakes in local customs if it will help establish trust with those the cross your path while traveling.  I grabbed the cig and lit up for the first time in years.  I don’t inhale.  Soon after, the two of us exchanged background.  He told me about his wife and kids and I told him what I did in the States and what I would be doing on the rest of my journey.

“I would like to spend a night sleeping in the Wadi Rum,” I told him.

A few minutes later he told me that we were taking a break.  We had only been driving for about 40 minutes.  Pretty soon to take a break, I thought.  He pulled off the side of a road and next to a rather large one-story building with many cars and buses parked outside.  It was a restaurant.  Again I felt embarrassed as I remembered that he hadn’t eaten all day.  He ordered us two plates of rice and lamb stew and we sat down to eat together.  It is not wise to eat and drink from a roadside establishment less than an hour into an overseas trip to a third-world country.  It’s just asking for gastrointestinal trouble.  However, protesting this food did not even cross my mind.  All around us were men who were similarly hungry from their first full day of fasting.  I liked the feeling of community and the friendly smiles all around me.  It was completely different than eating at a restaurant where you enter and leave with the people you came with.  Here you felt as if you were eating with the whole restaurant.  My driver explained that many of these people were Palestinian refugee day laborers.

We got back on the road and drove for two hours until arriving at Petra at almost 10 p.m. at night.  The driver took me to a hotel he recommended, which is code for “so-so place where I will get a kick back.”  Whatever.  I was beyond tired.  He told me that he had arranged for a room for me, and oh by the way…it had an extra bed.

Ummm.  No.  I needed my privacy.  That’s where I drew the line.  I had tea with some gentlemen in the lobby that were friends of his.  They told me that I looked Saudi Arabian.  Depending upon the length of my hair and whether or not I have any facial hair, I can probably pass for someone from any of about about a dozen countries. He crashed on a couch in the hotel lobby.  I was asleep within minutes in my room.

I awoke at 5:15a.m. the next morning.  All through my room was a booming voice speaking in Arabic.  “What the hell is going on,” I thought.  Was there a fire or something?  As the haze of sleep slowly lifted, I started putting things together in my mind.  “This must be the call to prayer.”  I hated being woken up this early but I again thought that it was a cool concept that everyone in the entire city was waking up to the same alarm clock.  “Everyone in their beds for miles around me feels exactly like I do at this very moment,” is what I thought at the time.  I had never woken up to praying before.  It was a good feeling.

Hours later, after sunrise, I was ready to explore the famous ruins of Petra.  Before doing so however, I needed fuel.  No shop of any sort was open, and my cab driver was given dirty looks for even asking for food for me.  There was no way I could spend an entire day wandering amongst the desert ruins without food or water.  Eventually I found some cheese and crackers. 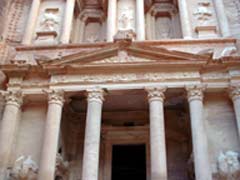 I had Petra mostly to myself that day.  There were few tourists at that time of year.  Absolutely amazing.  There was no Holy Grail to be found but it was worth every minute it took to get there.  Around lunch time that day is when my transformation began.  I was hungry but was feeling guilty about my hunger.  Even though I tucked myself in the shadows of one of the isolated ruins, I could only bring myself to eat two cubes of cheese and three crackers the whole day.  I couldn’t bear the thought of someone stumbling upon me and thinking that I was a bad Muslim.  The fact that I wasn’t really Muslim didn’t matter.  This pattern continued later when I was back in Amman.  I needed people around me to know that I was a good Muslim.  I wanted to belong to this place and to them in the way they belonged there and to each other.  It took me three days in a Muslim country to understand the power of Islam, and why it inspires such dedication.  You know with complete certainty that for at least that month you are one with all around you.  Throughout the day you feel what everyone around you feels and it makes you powerful even when you are so hungry that you may have to sit still.  I will probably never experience Ramadan again in my life but I am grateful that I got the chance to in Jordan.  I may not know the teachings of Islam the way accomplished scholars do, or unjustly interpret it as fanatical fundamentalists do, but at least I got to experience for a few days the one aspect that I feel may be the most important.  The brotherhood.

85 thoughts on “My first Ramadan”