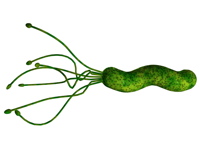 This year’s Nobel Prize in medicine or physiology was announced this morning. Barry Marshall and J. Robin Warren won for discovering that ulcers can be caused not by stress or genes but by a bacterium called Helicobacter pylori (shown here)

…Helicobacter infects half of all people on Earth…The scientists documented a surprising variety of genes in the bacteria. Each ethnic group they looked at carried a distinctive strain.

As scientists got to know the global variation of Helicobacter better, they began to discover a remarkable pattern. They mapped out an evolutionary tree of the strains of the bacteria and found that it lined up very well with the migrations of humans over the past 50,000 years. One study looked at the Ladakh province of northern India. Muslims and Buddhists have coexisted there for 1000 [years] but remain isolated from one another. It turns out that Muslim Ladakhs only carry a European strain of Helicobacter, while Buddhists carry a mix of European and East Asian bugs.

They might be neighbors, but that don’t mean they’re friends.

15 thoughts on “The Bugs Tell The Story”