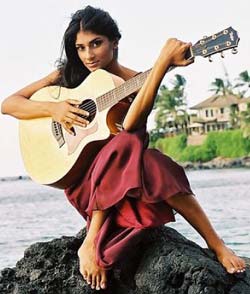 My singer-songwriter buddy Shaheen Sheik just got her first video onto MTV Desi. Brownie, you’re doing a heck of a job!

… i have literally grown up on stage. since the time i can remember, i have been rehearsing or performing… maybe there are folks who’ve never had to strip down on the side of the stage to make a 45 second costume change with the tech guys politely turning their heads and your fellow dancers frantically tucking things and wrapping you in costumes while you can feel the sweat running down your body…

there is not another thing in my life that i’ve experienced that has given me the kind of high from dancing with abandon. not drugs, not sex, not even a first kiss with a new beau. [Link]

Amen, sistah. Listen to ‘Wildflower World’ from her new indie album, Rock Candy. I promise you she’s better than the last singing phenomenon from Berkeley