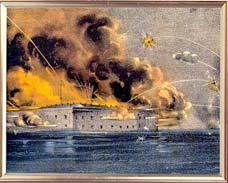 Following up on their account of South Asians in the American Civil War, Francis C. Assisi and Elizabeth Pothen describe the life and times of one Conjee Rustumjee Cohoujee Bey (a.k.a. Anthony Frank Gomez).  The story is so rich with detail due to the fact that Bey/Gomez wrote letters throughout his life to Henry Ward Beecher who mentored him after he entered this country.  Henry was the brother of Harriet Beecher Stowe who wrote Uncle Tom’s Cabin.  From the account:

For the purpose of our story, Henry Beecher takes on a pivotal role because it was his family that befriended the Indian prince, later converting him to Christianity and renaming him Anthony Frank Gomez. In the course of next two years, the Indian prince not only learned about Christianity from Beecher but went on to become his protÃ©gÃ©. He was a regular visitor to the Beecher household. He became an avid reader. He listened as Beecher preached against slavery, for political candidates, women’s rights, evolution, and his own idea of romantic Christianity that recognized God’s love for man and the availability of salvation for all. He engaged in intellectual discourse with the Beecher sisters.

Gomez, the scion of an Indian princely family, was at ease in that elite company. His British education, aristocratic bearing, and close links with the Beecher family, endeared him with major New York figures of the day, a group that included abolitionists, writers, and social theorists, as well as national and international personalities.

p>Beecher was a Reverend in the Plymouth Congregational Church and spoke with great vigor and conviction that slavery was a sin.  Guided by his mentor and his new religion, Gomez joined up:

26-year old Antonio Gomez answered the call of President Lincoln, and began his service in the US Navy: aboard the USS North Carolina at the Brooklyn Navy Yard, on 8 February 1862, as Ward Room Steward.

His next assignment was with the steam sloop USS Dacotah. Gomez was on board when she served in the waters around Hampton Roads. Assigned to the James River Flotilla, she had several skirmishes with the Confederates including those in which a company of her sailors destroyed a Confederate battery of 11 guns at Harden’s Bluff, Virginia, on 2 July, and one of 15 guns at Day’s Point, Virginia, the next day. She joined the blockading forces off Wilmington, North Carolina, on 8 December and served there until 11 June 1863 when she was ordered into quarantine at New York the next month when several cases of smallpox were discovered on board…

While serving aboard the first USS Iroquois, a sloop of war in the United States Navy, Gomez saw action at the mouth of the Mississippi River, where she prepared for attack on New Orleans, Louisiana. On 24th April 1864, under Captain Henry H. Bell, Iroquois moved abreast the Forts Jackson and St. Philip, guarding New Orleans, and, after a spirited engagement, helped capture the South’s largest and wealthiest city, and key to the Mississippi Valley…

Just as the Civil War drew to a close, Beecher was the main speaker when the Stars and Stripes were again raised at Fort Sumter, South Carolina, site of the war’s first battle. The private papers and personal correspondence of Henry Beecher reveal that Gomez was present on that occasion when the Union victory resulted in a grand celebration in the former “cradle of secession.” On April 14, 1865, Union officers and dignitaries gathered at Ft. Sumter. A band played, several nearby Navy warships, including the Niagara on which Gomez was serving, fired salutes, and there were hymns and prayers as the Union flag was transformed into a symbol of a restored and victorious United States.

The rest of the article is an absorbing read detailing his life in San Francisco and his eventual burial at the Presdio with full military honors.

7 thoughts on “The Parsi in the Presidio”