In my continuing quest to blog about hot, desi rocker-girls until one of them reads my flattery and marries me, I bring your attention to Shonali Bhowmik, the lead singer of the New York indie rock band Tigers and Monkeys [via Gothamist]: 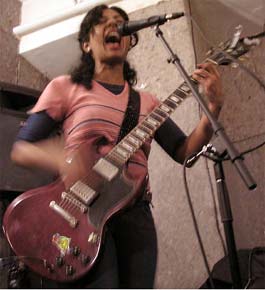 Shonali Bhowmik straddles several lines, living in two different worlds with perfect ease, and whether it’s music and comedy, the law and rock n roll, or balancing her Southern roots and East Village hipness, she does it with style, making it all look effortless. Having grown up in Nashville, Tennessee, the “30-ish” Bhowmik started her acclaimed band Ultrababyfat while in law school in Atlanta, and has continued to play in New York as leader of her band Tigers and Monkeys, who’ve opened for Sleater-Kinney and, most recently, Ted Leo at South Street Seaport. Armed with bluesy rock songs that highlight Bhowmik’s sultry drawl that can border on a sneer, the band rocks with tracks like “Loose Mouth” and “Something’s Gotta Give,” and are set to release their debut EP in November. She’s also part of the offbeat movies/music/comedy show Variety Shac, along with Heather Lawless, Andrea Rosen and Chelsea Peretti, hosting the monthly Williamsburg event and taking part in their hilarious video shorts, about everything from a potluck a workout. When Bhowmik spoke with Gothamist about being an Indian-American woman in indie rock, the power of being onstage, and playing for thousands of people, her enthusiasm for her musical career rang through loud and clear.

I mean come on.  The names of the two songs available for download on the Tigers and Monkeys website are called “Vampire in a Dirty City” and “I’ll Ruin Your Thoughts.”  How hot is that?  Perfect for me since I live in a dirty city and I ruin lots of peoples thoughts on a daily basis.

Q: What do your parents think of your career now?
A: They have been completely supportive of whatever I do, they fully approve now that I’ve been using my law degree to an extent. I definitely think that they’re surprised that I’ve stuck with music and it’s what makes me the happiest. They totally are a rare find when it comes to traditional Indian parents. I’m sure they’re wondering if I’m gonna just keep dating boys, they want me to get married. If they had an idea of my social life, they’d probably flip out. They come from such a different culture, they probably would never understand what I consider it to be a success in terms of music.

There is hope!  Check out the video as well.  VH1′s description of her previous band Ultrababyfat gives more info on her musical roots.

Q: How would you describe your sound? There’s something very Southern about it to me, in part because of your accent, but even the rock songs seem a little slower, a little more sensual or something.

A:  Tigers and Monkeys is a bluesy pop rock band in the vein of the Pixies and the White Stripes, mixed with country, and there’s a darkness to it. There’s a haunting sound beneath it all. Most recently I used minor chords a lot and I used to use major chords a lot and that’s a little more of a positive sound, so there’s a darkness that I’m grasping onto that makes me feel good.

8 thoughts on “Tigers and Monkeys…oh my.”