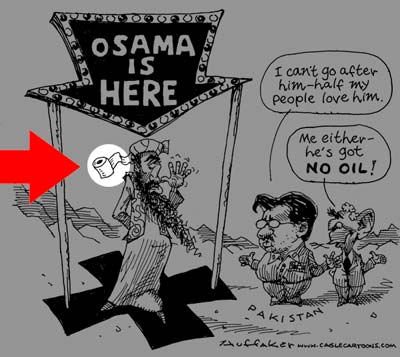 Sure, maybe it’s a stereotype, but 9/11 changed everything. We really need to sock it to the bastards.

Well, we’ll do it sensitively. We’ve learned from our excesses.

C’mon, what’s the big deal about toilet paper? It’s just a throwaway joke. Nobody in America wears a turban. Seriously, you guys are way too sensitive.

Jerry: Kramer, he’s just a dentist.
Kramer: Yeah, and you’re an anti-dentite.
Jerry: I am not an anti-dentite!
Kramer: You’re a rabid anti-dentite! Oh, it starts with a few jokes and some slurs. “Hey, denty!” Next thing you know you’re saying they should have their own schools…

Jerry: That’s a good one. Dentists.
Beth: Yeah, who needs ‘em? [Pause] Not to mention the blacks and the Jews… [Link]

Geez, can you say ‘overreacting’?

… Frank Roque, 42, of Mesa, began spouting racist remarks to a bartender and co-workers, including that he was going to “kill some towelheads” and that all Arabs and their children should be rounded up and murdered… Roque drove a black Chevy S-10 pickup to a Chevron gas station and opened fire, killing [gas station owner] Balbir Singh Sodhi… [Link]

“I’m an American,” the suspect… said. “Arrest me and let those terrorists run wild.” [Link]