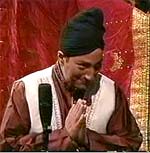 Here’s a crude parody of Indian TV by Jay Leno’s Tonight Show (air date unknown). This is a purposely lame clip — its sin is its artlessness. Two of the cast members are wearing brownface, and the accents and turbans are all wrong. ‘Sanjay Leno’ isn’t wearing a turban, he’s wearing a helmet from the NiÃ±a, the Pinta and the Santa MarÃ­a. The white guy with his ears exposed is wearing Smurfette’s cap, not a patka. Wajid, the actor playing the Kevin Eubanks-like sidekick, isn’t bad, but then he doesn’t have to make a cultural stretch. Watch the clip.

You know what’s happening — some people are nostalgic for Peter Sellers. They prefer the crappy approximation of desi culture they grew up with rather than the real thing. The Americana which relies on mocking India badly (calling Apu Nahasapeemapeemapetilon) has, over time, become comfort food. No wonder the original title of Goodness Gracious Me was Peter Sellers is Dead.

Yeah, yeah, we all love The Simpsons. Does anyone remember when it first came out? Heh, heh… hey, wait, that shopkeeper with the long, fake last name, limited social intelligence and shit-eating grin, that wasn’t cool. Like a cancer survivor missing his tumor, like an East German missing the Wall, every poison, once custom, is remembered with fondness.

… producers were initially concerned about making the character Indian. “We were worried he might be considered an offensive stereotype,” producer Al Jean once said. “But then we did the first read-through, and Hank said, ‘Hello, Mr. Homer,’ with his accent, and it got such a huge laugh; we knew it had to stay.” [Backstage]

You see? It’s ok as long as you can mimic Mr. Birdie Num-Num (or as long as it’s funny: hoisted by our own petard?)

Ah, that accent, that accursed Peter Sellers accent. The one that no actual desi actually uses. Oh, there are many desi English accents. I could catalogue half the subcontinent for you. Some are even quite funny. The one used by Sellers, Leno, Hank Azaria? Never heard it in the wild. That’s a Sellers original, a bad simulacrum invented for comic value. What happens when desi actors in Hollywood are asked to stop talking the way they talk and do the fake one, ‘You know, do Apu’? They swallow their pride and do it.

“I walked into the audition, and the casting director said ‘Where’s your turban?’ I said, ‘I don’t wear a turban. I am not a Sikh.’ I started to explain the difference but she got very upset and said, ‘Well, can you go home and put on a bed sheet or something?”

They don’t want India. They want the American conception of India circa the Dark Ages. All the Leno people had to do was ask the desi actor they’d already hired. Andrew Huff has some interesting commentary on the pervasiveness of this stereotyping in America:

Case in point, today’s column by Richard Roeper in the Sun-Times, in which he discusses the heckling of Sikh golfer Vijay Singh:

What cracks me up about this incident is the utterly tame nature of the heckle: “Hey Vijay, I think Annika could have put it in!”… that sounds like something you’d hear if you couldn’t properly load the Slurpee machine…

Properly load the Slurpee machine?!? Comparing a pro golfer with a convenience store owner? WTF?! I know Apu is a dearly loved Simpsons character, but about the only more negative stereotype Roeper could have chosen would probably be donut shop owner. There’s no way Roeper would have approached such an image had the golfer been black — the racial discrimination lines are too well drawn there, and he’d have Jesse Jackson on his ass in a minute. But since Singh is an Indian, and there are so few Indians in America, it seemed he felt this little insult could slide. After all, it’s just what Indians do, right? Run convenience stores and donut shops and drive taxis? Right?