There are two million South Asian Americans – at least those were the numbers we had to use and were derived from the 2000 Census. But as we’ve written before, the numbers of the community were suspected as being underestimated in the previous Censuses. The data from the 2010 Census has been slowly release this year and last month the Asian Pacific American Legal Center released their latest report “A Community of Contrasts; Asian Americans in the United States: 2011” (download PDF here) which has a comprehensive national community analysis. 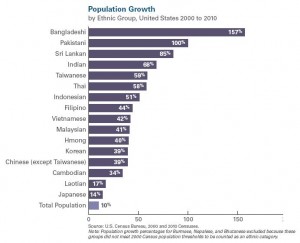 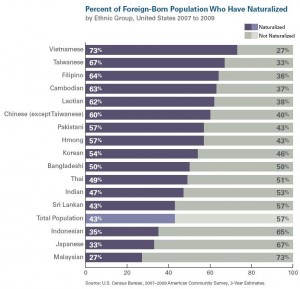 The citizenship rate of foreign-born Asian Americans has also increased, from 50% in 2000 to 57% now. India has one of the greatest number of legal permanent residents eligible to become citizens and 57% of foreign-born Pakistanis have been naturalized. Yet, there are still language and cost barriers associated with citizenship and this remains a hurdle to full civic engagement. END_OF_DOCUMENT_TOKEN_TO_BE_REPLACED