Hari Kondabolu’s video Manoj is up in its entirety** on YouTube. It’s about 11 minutes long, and well worth a look:

I mentioned the short film and posted a few lines of the script a few months ago. It’s well done — my favorite bits include the “South Asian Studies” major, and the comedy club owner who wants Manoj to “Indian it up” with the curry and cows.

Having short films like this available might be especially good for young Desi comics starting out, as they try to figure out how to tread the line between intelligent ethnic comedy and self-hatred. That said, I think the film also shows that there really is a gray area there; aren’t many people (including many Indian Americans) still quite prepared to find a comedian like “Manoj” funny? (Paul’s comment in the earlier thread on this also illustrates how the path to the right kind of “Desi material” is not an easy one.) Another issue raised here (and I know everyone is tired of it) is the ABD/DBD divide, specifically the different relationships to Indian accents. I imagine some readers might watch this and think, “well, isn’t Hari himself actually using a fake version of the Indian accent here for comedic effect?”

(For those in the Washington DC area, Manoj will be screened publicly as part of the DC Asian Pacific American Film Festival this Friday night at 7pm. Another obviously Desi short is Maya Anand’s Anjali, which screens on Sunday.)

** Hari emails me to say that the YouTube version is itself slightly edited. The real full version of the film (15 minutes) is at Vimeo, here. END_OF_DOCUMENT_TOKEN_TO_BE_REPLACED

Star Wars fans were excited to learn today that a new animated film based on the the Star Wars Universe will be released this August:

Star Wars: The Clone Wars makes its theatrical debut as an all-new, computer-generated feature film in August 2008, followed by a television series in the fall.

The new adventures in a galaxy far, far away apparently take place between the second and third Star Wars prequel films, similar to the Clone War series of the same name that ran between 2003 and 2005. Returning characters include Anakin Skywalker – who later becomes Darth Vader – along with Obi-Wan Kenobi and Padme Amidala. New heroes also join to battle familiar villains from the Star Wars prequels, such as Darth Sidious, Count Dooku, and General Grievous.

“I felt there were a lot more Star Wars stories left to tell,” said George Lucas, Star Wars creator and executive producer of Star Wars: The Clone Wars. “I was eager to start telling some of them through animation and, at the same time, push the art of animation forward…” [Link]

One of the major points covered in the press release is that a new female Jedi character will be introduced. She will serve as Anakin’s padawan (the way Anakin was Obi-wan’s padawan). The name of this young Jedi (who will of course eventually be hunted down and killed by Vader) is Ahsoka Tano: 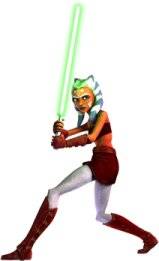 … among the familiar characters like Obi-Wan, Anakin and Yoda is a mysterious new Padawan named Ahsoka Tano.

This young Togruta is eager to prove herself as a worthy Padawan to her bold Master, Anakin Skywalker. Able to wield a lightsaber and pilot a spacecraft with great talent, Ahsoka promises to become a worthy Jedi. [Link]

END_OF_DOCUMENT_TOKEN_TO_BE_REPLACED

Via SAJAForum, an…interesting political cartoon by Ted Rall which experiments with a provocative question: what if Republican threat to everything presidential candidate Mike Huckabee were a different sort of fundamentalist?

Here are the cartoonist’s own words regarding this work, from his blog:

Today’s cartoon responds to the generally respectful tone accorded Mike Huckabee, who does not believe in evolution and is therefore, by definition, a lunatic. [vague link]

I do appreciate Rall’s overarching point– Huckabee is allowed to be as batshit crazy as he wants to be because he’s on the fundamentalist fringe of my religion instead of any other one– since I’m no fan of the preacher man. It’s a very valid concern. END_OF_DOCUMENT_TOKEN_TO_BE_REPLACED

If the pop culture ref I used for my title didn’t float your yacht, try this one from tipster Raj, who single-handedly ruined my afternoon by sending us the bad news:

A moment of silence, please, for the adorable, paavam*, wide-eyed IIT alum who will no longer be available for scapegoating and abuse. Wait a second…maybe he’s better off away from Wally, the Pointy-haired Boss and everyone else he (got) worked (over) by.

Asok (pronounced “a-shook”) is an intern in the Dilbert comic strip. He is a brilliant graduate from the Indian Institute of Technology…Asok often solves difficult problems in a few keystrokes, but he is still naÃ¯ve to the cruelties and politics of the business world. As a result, he often ends up being the scapegoat for his coworkers’ antics. Despite many years as an intern, and performing the functions of a senior engineer, Asok has been denied permission to be a regular employee and the usage of company resources for his work.

It has been mentioned that Asok once lived in the handicapped stall of the bathroom; he later moved to a storage facility (but was only allowed an hour leave for moving by the Pointy-Haired Boss). Asok is also trained to sleep only on national holidays, a trait that he allegedly carried over from his alma mater. In addition, he was trained during his time at the Indian Institute of Technology in telekinesis, using it once to vaporize an obnoxious Texan and more recently to stealthily steal donuts in a meeting, and remove asbestos from the office. As well, he has mentioned that he has the ability to reheat his tea by holding a cup to his forehead and think about fire. Asok appears to be a fan of Indian music: in the animated episode “Art” he is shown listening enthusiastically to a female vocalist singing in Hindi. Recently, the Pointy-Haired Boss announced that Asok died while on a test of a moon shuttle prototype. Asok had planned to reincarnate into his clone, unfortunately Carol had used the jar containing his DNA as a candy jar. It is not known how Asok will return. [viki]

If you are one of the three people reading this post who has not been exposed to the charm of Asok, read on:

Asok: You can use my key to open the box with its teeth.

Dilbert: To open this box I’ll need something stronger than a key.

END_OF_DOCUMENT_TOKEN_TO_BE_REPLACED

Every year, at Ramadan, Hawk draws comics showing how his alter-ego is dealing with the challenges of fasting. These trippy comics are some of my favorites:

If you click on it, it’s the first in a sequence of Ramadan fasting themed strips.

END_OF_DOCUMENT_TOKEN_TO_BE_REPLACED

It looks like Jughead wont be the only cartoon character wearing a crown in Riverdale any more, there’s a desi (probably ABD) character in Archie’s world (via UB). I’m happy that the character looks and sounds like the others, hopefully he wont be Hajji to Archie’s Johnny Quest.

That said, I actually associate Archie more with India than America. I rarely saw Archie in the USA, but when I went to India there was always a stack of Archie comics in my relatives’ houses in Delhi. Since I often got bored hanging around while the adults caught up on years of news, I spent many hours reading the escapades of Archie, Betty, Veronica, Reggie and Jughead. Just writing this brings back that India paper smell, and all of a sudden I’m 10 again and in my parents’ country, with all the ambivalence that entails.

END_OF_DOCUMENT_TOKEN_TO_BE_REPLACED

…in a land not-at-all far away, there was a divisive issue that was almost as annoying as Paris Hilton– and just as ubiquitous, too.

According to the SAJAforum blog, yesterday, there was another cartoon on outsourcing (shocking! original! unexpected!).

This time, it’s Mother Goose & Grimm who are having their say. Well, more like Grimmy and Attila, but you know what I meant.

Do you think it’s funny?

Better yet, does anyone feel like getting creative the way our beloved DJ Drrrty Poonjabi did with the last cartoon I blogged about on this “hot topic”?

w00t Nina! Thanks for the prompt “revision”.

…that’s much better. Anyone else? END_OF_DOCUMENT_TOKEN_TO_BE_REPLACED

Questionable Content is a cult webcomic that is a cross between Friends and Seinfeld, except for Indie music snobs instead of mainstream audiences. It’s a “slice of life” story about 20-somethings in Northampton, Massachusetts. Recently, author and illustrator Jeph Jacques introduced Meena. 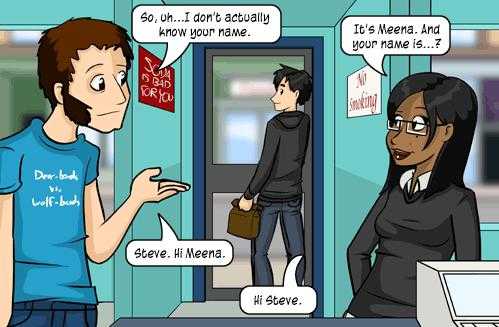 Meena works at the morgue, and flirts by making Ebola jokes. (This is realistic – I do know desi women in real life who flirt by making jokes about horrible diseases). She also has all the normal tribulations of a desi woman: 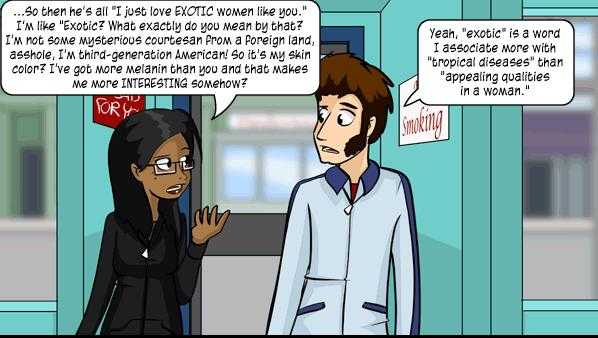 END_OF_DOCUMENT_TOKEN_TO_BE_REPLACED

…via SAJAforum. This ran in the WSJ today, as we were still discussing caste on this blog. What excellent timing for a barely-mediocre cartoon.

What do you think? Over at SAJA, commenter Sendhil had the following to say, which left me giggling:

If this is from the WSJ’s “Pepper… and Salt” spot, it’s not unusual that it’s not funny. Those cartoons are funny less often than “Fred Bassett”. I have concluded that they must serve some other, hidden, purpose, like sending coded messages about tomorrow’s Dow performance to the members of the Trilateral Commission.

A raccoon, a turtle and a squirrel walk in to a bar…and nothinâ€™. But this procyonid, testudine and rodent are a bit more useful than thatâ€”theyâ€™re amusing. Via Sajaforum:

Come back, little papaya, with or without those bees. We long to know what directions your tresses could have taken next, what conditioner you use, and whether you â€˜poo. No, really…do you? And where do you stand on hair oil? Perhaps we’ll never know… END_OF_DOCUMENT_TOKEN_TO_BE_REPLACED