Yesterday, news agencies all over the world carried stories of Sikhs in Southall standing guard outside of Southall Gurdwaras to protect them from the rioters who had attacked neighboring wealthy Ealing the day before. It was a feel good story with great visual appeal, captured nicely by this picture: 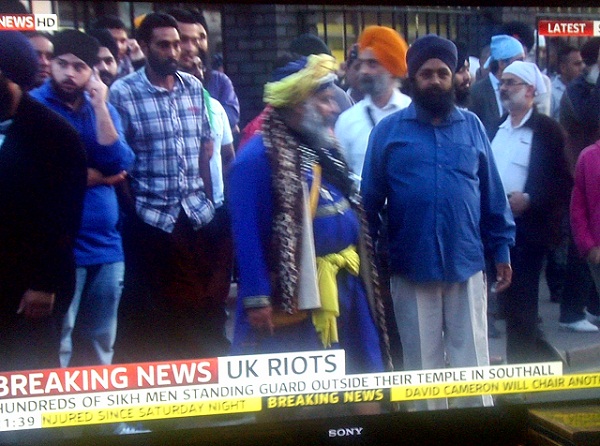 Two things got missed in this simple story, however. First, the story of community self-defense is much larger than just Sikhs or Southall. All residents of Southall worked together, across religious lines, to guard each others’ places of worship (Gurdwaras, Mosques, Mandirs) and businesses. Nor was Southall the only place where this happened. Bangladeshis mobilized in Whitechapel, Brick Lane, and Bethnal Green; three desi men were killed while defending their neighborhood in Birmingham.

There’s another layer here though, which is about a deep mistrust of the police, dating back over 30-40 years. Southall was a place where white supremacists could murder a desi teenager and not get prosecuted, where cops could engage in brutality, and where, in 1979, peaceful protesters fought back after being viciously bludgeoned by mounted police. One protester was killed by police, but nobody was ever held responsible for it. This video clip tells the story well:

So when the police issue warnings against “vigilantism” to discourage community self-defense groups, it’s likely falling on deaf ears. Members of the community will work with the police, but they’re not about to stand down and trust the police to protect them.

8 thoughts on “Community action in Southall, then and now”