P: That’s simple. I aged out at 21. You see, when a visa petition is approved, a family has to wait many years to actually get a “priority date” in order to immigrate legally. I was 24 by the time my parents received their priority date. Regardless of the fact that my name was on the original visa petition filed for my family, I was automatically castigated and separated from my family. My parents were no longer considered my “immediate relatives.” I find it morally repugnant, but I’m sure there are many young adults who have experienced the same horror of family separation due to an arbitrary age out of our control.

T: What hurdles have you come across in your attempt to be documented?

P: I received admission into several prestigious institutions out of high school but either the cost was prohibitive or the universities rescinded their offer after finding out about my status. I don’t have access to any financial aid so I went to community college and state schools instead and while they were much cheaper, I had to work full-time. After classes would end for the day, I would clean office buildings till the wee hours of the morning to afford my college tuition and make ends meet. I also don’t have the privilege of federal loans like other law students who can borrow up to $75,000 per year so I have to continue working while also carrying a full-time law school course load. Due to lack of identification, there are other struggles like inability to travel, inability to work legally and inability to drive legally, that people in my situation face. It is like a physical and emotional impairment at times. I avoided bars and night-clubs for a long time because it was too much of a pain to carry my passport everywhere.

T: How do you feel about the immigration debate being framed as a Latino/Mexican issue?

P: I have a parenthetical status in the immigration debate as someone of South Asian descent. Sometimes reporters are unwilling to interview me due to their own internalized racism — they want a Mexican-American or Latino. Other times, people automatically assume I am from Mexico and tell me to go back to Mexico. Once I saw a picture of mine floating on the internet where I had been given a Latino male name — Palacio. I found it quite offensive. That said, I have more Latino than South-Asian friends and realize that due to the border we share with Mexico, immigration is an especially volatile issue for Latino communities.

T: Do you pay your taxes?

P: There’s sales taxes that every immigrant pays. I also pay business taxes to the state of California. My family pays several thousands in taxes each year when property taxes are taken into account. They are subsidizing the education of American citizens while their own daughter cannot get any federal loans to go to college.

T: You are a big advocate on behalf of the Dream Act. What are you advocating for and why is it important?

I think i said it best in this post for SAALT:

” …I’m queer and undocumented. Along with undocumented youth from across the country, I’ve worked to rip the DREAM Act from the clutches of the non-profit industrial complex, to queer the immigrant rights movement and to create a culture of radical dissent and accountability….

I hope no one is waiting for the DREAM Act and other pro-immigrant legislation to pass. It’s erroneous to think that incremental reforms like passing a single piece of legislation would change our lives dramatically. Our movement is not about passing a piece of legislation. It is about creating and fueling spaces for dialogue and resistance, building structures and networks that work for those who have been historically disenfranchised and castigated, and becoming our whole selves again. It’s not about waiting for change or for the right time to demand solutions but demanding change and creating our own solutions. It’s about being undocumented, unafraid, unashamed and unapologetic — and that includes not blaming our parents for alleged transgressions, not feeding into the military industrial complex and not serving as part of the grand narrative that seeks to criminalize other immigrants.” 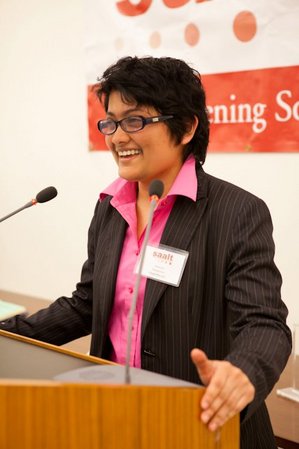 T: Last month you were awarded the Changemaker Award by SAALT and you wrote a really touching blog post afterwards. How did it feel to get that award, as a Fijian-Indian-American?

P: Surprised and shocked. I don’t necessarily identify as South Asian. I used to keep my distance from other Indian people and my own Indian identity. Once bitten, twice shy. As a teenager, I remembered them as friends who had laughed and ridiculed my gayness, family members who would belittle me despite my various successes and people who denied my Indian-ness by pointing out that I was from Fiji. I couldn’t relate to the women who would hold fasts for their husbands, the women who would suffer in silence or the women who caved to family pressure. Sometimes I thought there was nothing remotely desi about me besides the way I looked. My queer identity grew in opposition and direct denial to my Indian one.

Then one day I was getting recognized for my LGBT and immigrant rights work, in front of a room full of South Asian people, some of them who were queer themselves. I never thought I could feel whole in my lifetime but I was wrong. I like to think I’m evolving now and coming full circle. Right now, I’m more concerned about unearthing my own queer South Asian diaspora roots than belonging to any white gay politics masquerading as human rights for all, especially when it is white colonialism that repressed the various modes of sexualities in our cultures.

T: Do you identify as South Asian? What was life growing up in Fiji?

P: A lot of my consumption of Indian-ness comes from Bollywood and that is true for whether I was living in Fiji or America. But I’m not an Indian-American. I’m a Fiji-Indian American. To deny the Fijian part of me is to deny the history of my ancestors as indentured servants who were taken by the British to Fiji, away from their homes and families and compelled to build a new home for themselves in a completely foreign place. They were subjected to all sorts of abuses and finally compelled to leave the country after a hundred years of contributing to the social, economic and political fabric of the country. It’s not unlike what the United States is doing to me now — kicking me out of my home — only I have more rights and privileges than my girmitya great-great grandparents who crossed the Kala Pani.

T: You are a long time blogger and have written on change.org and your own site. How/why do you feel blogging/telling narratives is important to advocacy?

P: I think our stories are our best weapon against a system that suppresses and denies our truths. It is said that history is written by victors and I take that to mean that if I am writing my own story, I’m probably also victorious. At the same time, we have to be mindful that our personal narratives of pain and trauma, love and joy don’t conceal other narratives such as the subjugation imposed by neo-liberalism on our lives and bodies.

T: You’re getting hella educated and have lots of degrees under your belt. What do you want to do with these degrees?

P: Honestly, I actually want to write books, as in novels and maybe some non-fiction but I also don’t want to be known as yet another person of South Asian descents who writes those novels about painful and traumatic immigrant experiences. How contrived and cliched. One day, I want to be a tenure-track professor but personally, I’m just looking for love in my life.

Aren’t we all? To follow Prerna on her journey for love and justice, visit her blog www.prernalal.com, her tumblr The Queer Desi, her online art installation documenting stories of the South Asian diaspora, and her RedHotDesi twitter account. Keep dreaming.

Images of Prerna Lal found on her blog at www.prernalal.com