Unfortunately there’s not as much quantitative data on Indian Americans as I’d like. To be fair, you can say that about almost anything, by which I mean there’s always a lack of enough data for my taste. One good source is the Religious Landscape Survey. 90% of Indian Americans are not Hindu, but 90% of Hindu Americans seem to be Indian. But that’s suboptimal. The Census has some good information, but is moderately constrained in what it can give you. There is one option which I’ve avoided for a while, the General Social Survey. This is a huge database which you can query if you are comfortable with using forms on the web (you should be). You can limit to people who say that their ancestors are from “India.” Unfortunately the sample size is only in the hundreds.

But I thought I’d give in a try, because I wanted to look at some intra-community cross-tabs. The main aspect I wanted to look at is religion & politics. Indian Americans are overwhelmingly a Democratic-leaning community. But not all. This tendency toward the Democrats has been relatively strong in Asian Americans generally since 1992, when George H. W. Bush won that demographic. And yet I noticed an interesting trend in the American Religious Identification Survey 2008: Asian American Christians were far more sympathetic to Republicans than Asian American non-Christians. The past 20 years has seen a massive rise in the proportion of non-Christian Asians, whether it be Hindu, Sikh, Muslim, Buddhist, or secular. The standard narrative in American politics is that the Republican party is the white Christian party (even more so, the white Protestant party). The Democrats are the coalition of “Others”. Minorities and non-Christian whites (seculars and Jews). This has clear first approximation value, but I think the insight that Asian American Christians are more sympathetic to Republicans than other Asian Americans indicates that there is some texture which can be perceived at a finer-grain.

My goal here is exploratory, and I want to encourage readers to poke around the GSS themselves. In short I limited the data set to 1990 and later, to people who said their ancestry was from India. Unfortunately this is only a few hundred, but it may be informative for large between class differences. I focused on differences across religion and levels of education. Some notes:– I combined Christian denominations as well as Dharmic religions to maximize sample size.

I apologize for the formatting on the tables, but they’re screenshots of the GSS. The data is for real, even if the presentation is 1997.

Here’s a screenshot of the page I started with: 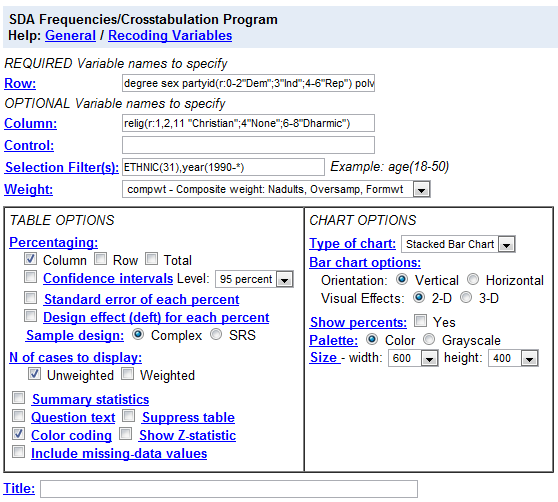 The numbers represent codes. As someone who’s used the GSS a lot I know that for the RELIG variable 1 = Protestant, 2 = Catholic, etc. Most of you probably don’t, so you might want to copy my starting position to begin with if you want to start cranking out tables. 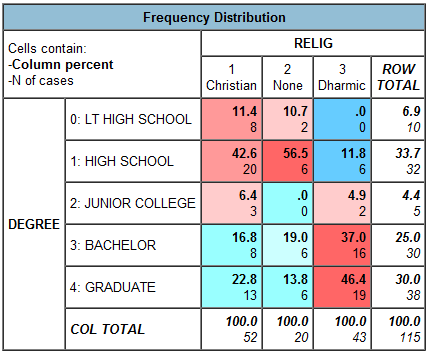 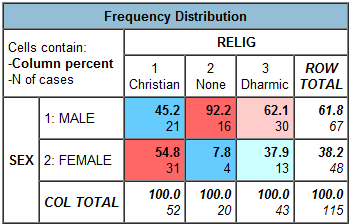 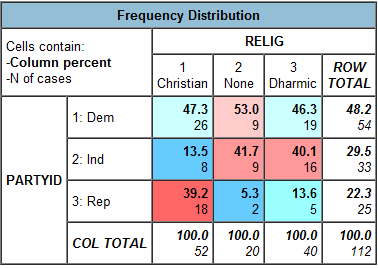 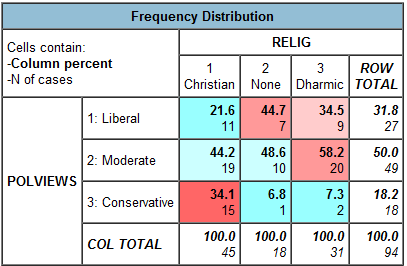 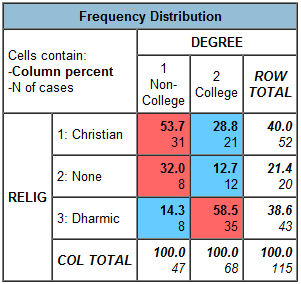 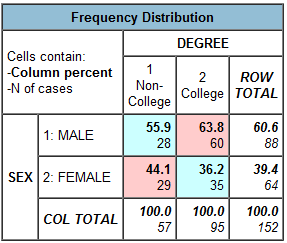 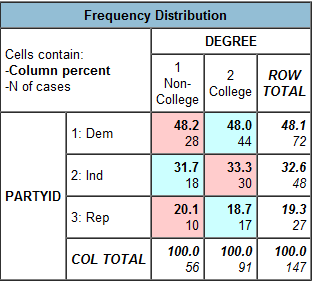 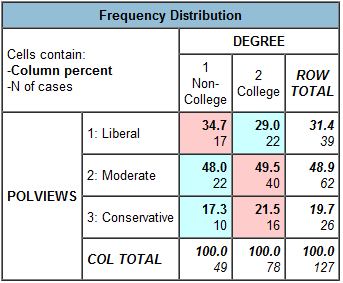 Interpretation? I think the truism for Asian Americans found in ARIS 2008 holds for Indian Americans: non-Christian Indian Americans are very averse to the Republican party and conservative ideological orientation. Looking at the religious identification by age cohort (not shown, use the COHORT variable) it seems pretty clear that because of high immigration levels the Indian American community is going through the same transition as the rest of the Asian American community: the proportion of Christians is decreasing. I suspect the shift away from Republican identification is then in part due to double alienation from the identity politics of the modern American Right, that of race and religion, common among immigrant heavy Asian American subcultures. To check, let’s look at those whose ancestors hail from Japan and China separated by those who are Christian vs. those who are not: 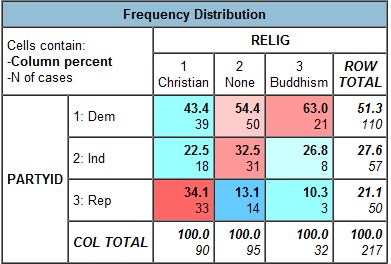 Again, the same tendency. This shouldn’t be that big of a surprise, after all the same division is mirrored in the general population. The Republican party and conservative orientation is associated with evangelical Protestant Christianity among whites, while Democratic leanings and liberal views tend to be associated with Jews and the irreligious (with Catholics and mainline Protestants somewhere in the middle). The valence though is somewhat different in Asian immigrant communities, which are religiously more fluid and pluralistic. Though Christian identity doesn’t seem to imply that Latinos and blacks are particularly favorable toward the American Right,* it does seem to have some predictive value among Asian Americans. It can naturally explain the much stronger tendency of Korean Americans to be Republican as opposed to Chinese and Japanese Americans. Evangelical Protestantism is much stronger among Korean Americans.

Why the difference? Identities are bundles of various factors. Race, ethnicity, religion, and class. The history of black Americans in the United States makes them somewhat sui generis. Latinos are still shifted toward the working class, and working class and poor people of color tend to vote Democrat no matter their religious identity (in fact, depending on how you identify working class, this is true for whites as well, see Red State, Blue State, Rich State, Poor State). In contrast, Asian Americans are very diverse when it comes to class. There is a recent finding in social science that cultural values tend to matter most when people have ascended somewhat higher up Maslow’s hierarchy of needs. In other words, the “culture wars” are a middle and upper class luxury. Non-economic identity variables are particularly predictive on the upper socioeconomic strata. I suspect then that what’s going on is that non-Christian Indian Americans are often identifying with Jews and secular Americans on cultural values, as part of the “Other” coalition. Christian Indian Americans with a conservative theological bent are more likely to identify with the white Christian party, because there’s a basis for common alignment. If the thesis that education and income free people up to become more ideological and culturally conscious, then Christian identification among Indian Americans should predict Republican party identification among the more educated segment.

The sample sizes are small, but the GSS results point in exactly this direction: 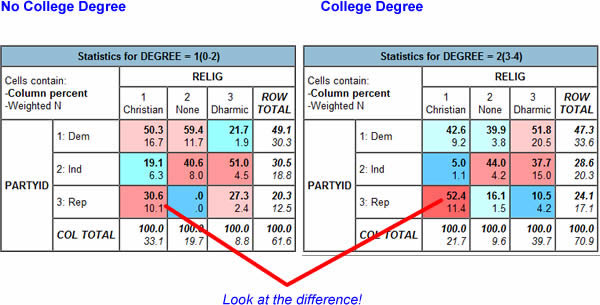 * Though there does seem to be a very modest effect of Protestant identity among Latinos making them more amenable to Republican party identification or conservative ideological orientation.