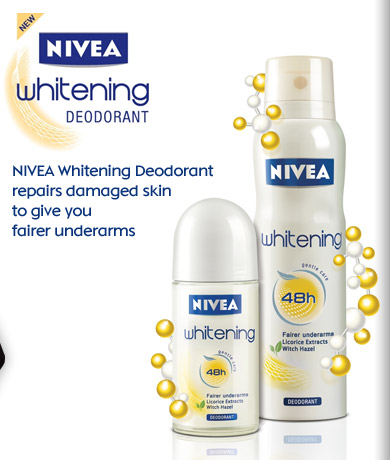 Only a few weeks till the start of summer. This can only mean one thing: skin. Bring on the season of skin-baring shorts, skorts, minis, sundresses, tank tops and bathing suits. And if you’re desi, bring on the nagging moms and aunties who try to tell you to cover up – more for the sake of preserving your complexion than for modesty’s sake. I think you all know how I feel about our society’s obsession with skin coloring. But I was reminded of it again when Ennis sent me a clip of an upcoming documentary, “Dark Girls.” The clip features African American women, but the movie’s producers write, “We know this issue goes beyond the United States and Black people. This is for ALL women from around the world.” I agree.

And just in case anyone thinks Fair & Lovely ads are more for their parents’ generation than their own, take a peek at MTV India’s “Shed Your Sleeves” campaign, which features Nivea products that ostensibly promote fairer skin. (Hat tip to Nila.) More specifically, “NIVEA whitening deodorant repairs damaged skin to give you fairer underarms.” The product purports to lighten skin through licorice extracts that “counter skin darkening.” Give me a break.

This deodorant contains plant extract, licorice, a traditional skin lightening agent which cuts melanin production. Another major constituent of this deodorant is witch hazel extracts from its leaves, barks and branches. It also has an astringent property that helps soothe the skin and repair any small wounds or itching. The effects of Whitening last 48 hour at one go and claims to repair underarm skin and make it fairer and even toned.

The product is being promoted by a television ad campaign that communicates the product benefits and is running across mainline channels focused on women in the age group of 15-34 years. Nivea has also teamed up with youth music channel, MTV, to undertake a series of below the line activities starting with ‘Shed Your Sleeves, the Biggest Freedom Movement for Women’. [Link.]

The ad cleverly uses social media marketing to attract a younger audience, encouraging girls to share pictures of themselves wearing sleeveless clothing on MTV India’s Facebook page, which has over 2 million fans. (I took a look at the page, but couldn’t find more than one photo.) It also gives consumers the option to put “Shed Your Sleeves” banner ads on their personal Facebook page. Good job, Nivea. Preying on the fears of young girls under the banner of “empowerment.” I applaud your strategy. And boys, Nivea features a similar product for you as well, should you become too comfortable in your skin.

Young ladies of a certain age – live your life. Don’t skip out on the beach, the pool, tennis lessons or whatever this summer because you fear the sun. You don’t need creams, deodorants or Facebook apps to be beautiful. So go ahead, show a little skin.

47 thoughts on “Shed Your Sleeves: Lose the Skin-Lightening Creams”