In the comments on this weblog there are lots of debates about what person of religion X thinks. This has particularly been vexing to me when someone asserts “Christians believe Y,” based on interactions with a particular type of Christian. Though CUNY”s American Religious Identification Survey and the General Social Survey are excellent resources, probably the best clearing house on American religious data is Pew’s Religious Landscape Survey. Unfortunately Pew’s specific data is hard to link to, so I’ve had to repeat the same information over and over and given instructions on how to find the specific data through a series of clicks.

To get around this I decided to replicate some of the data points of possible interest to readers of this weblog. I extracted Hindus, Buddhists, Evangelical Protestants, Mainline Protestants, and Roman Catholics. The majority of South Asian Americans are of Hindu background, and even more of Indian Americans. Buddhists are diverse, but since they are of the same broad religious family (Dharmic) as Hindus I thought they’d be a good check. The Evangelical Protestants here are traditional white denominations, not the historically Black Protestant denominations. Mainline Protestants refers to the major establishment Protestant denominations, Episcopalians, Methodists, Presbyterians, and Lutherans (note that a minority of Methodists, Presbyterians, and Lutherans, are evangelical, but the majority are not. The Presbyterian Church (U.S.A.) is not evangelical, but the Presbyterian Church in America is). Do remember that Hindus in particular are still predominantly an immigrant community in the United States (this makes sense of their peculiar age distribution).Except for the first chart the data are shown as bar plots where each class adds up to no more than 100% (sometimes I omitted “does not know” responses, so they may be less than 100%). This means that when you see the “Hindu” cluster of bars they add up to no more than 100% or 1.0. So 88% of Hindus are Asian American, with the other 12% being divided amongst the other races and ethnicities. The sample size is not too large, but I am modestly confident that it is representative, because both the educational and income data align rather well with what we know from the American census in relation to Indian Americans (the census itself does not collect religious data at this time) 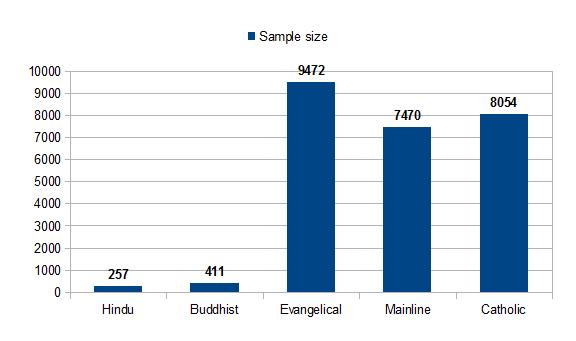 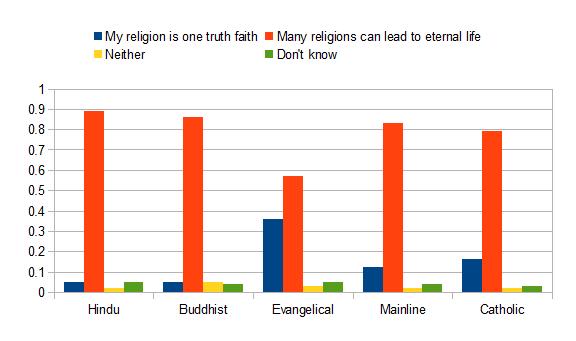 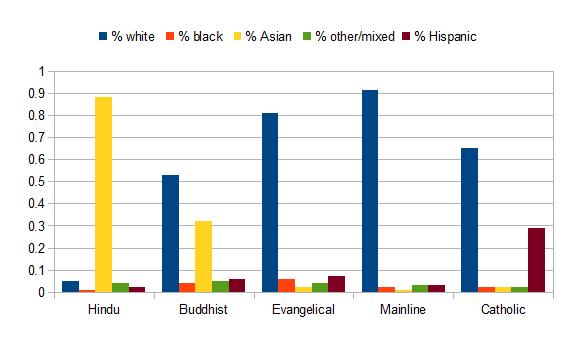 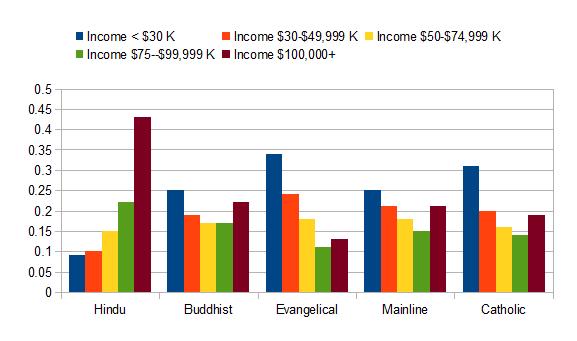 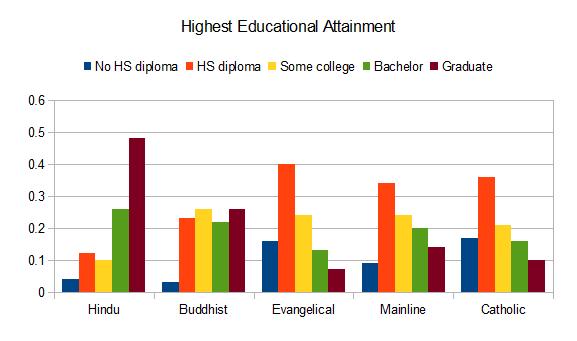 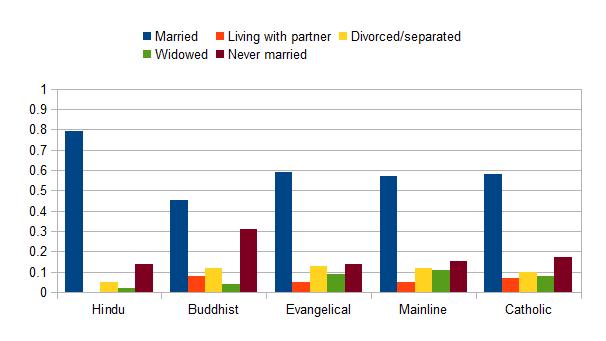 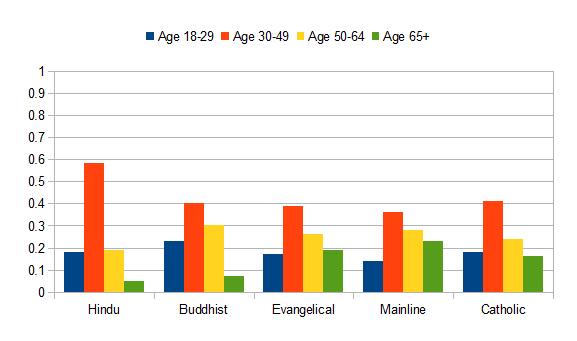 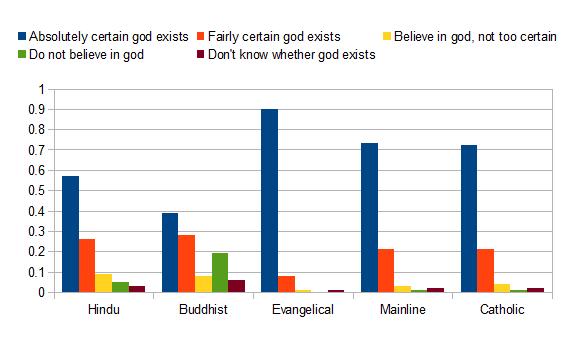 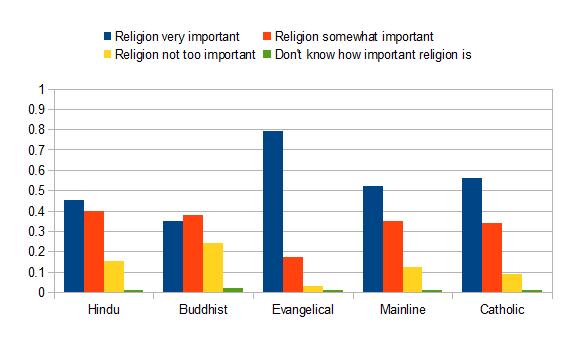 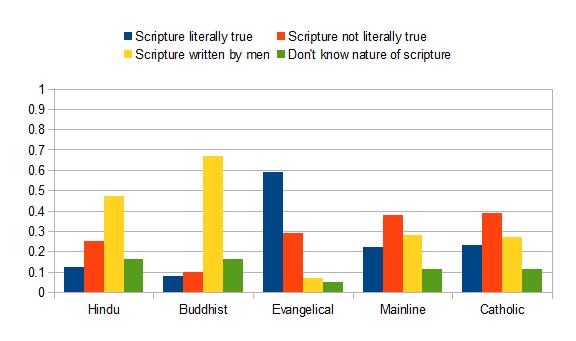 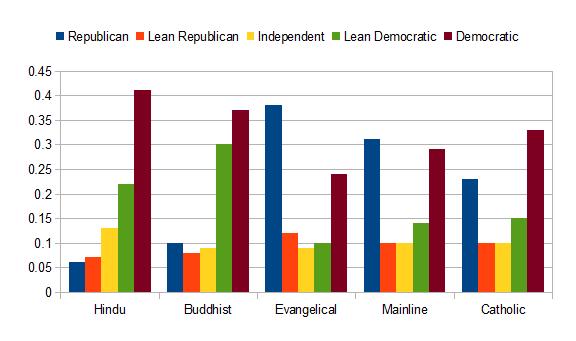 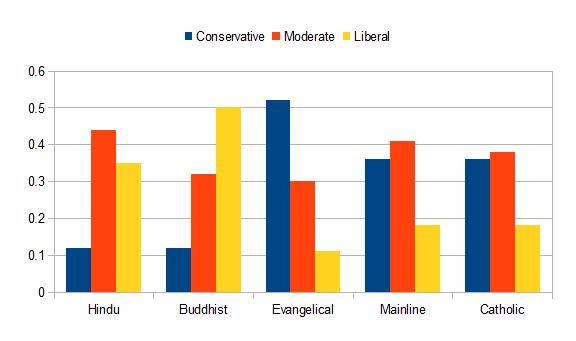 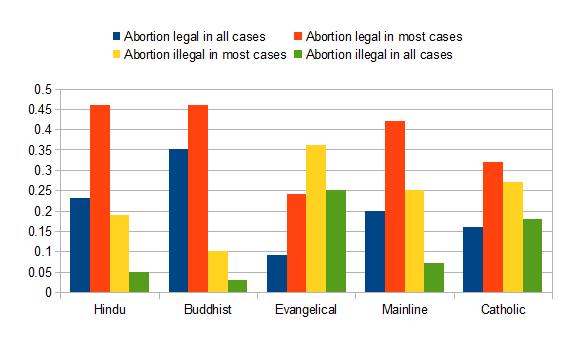 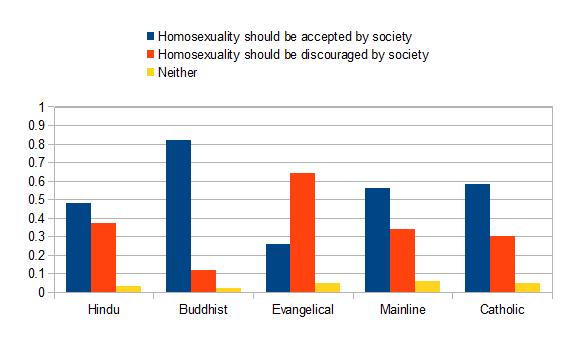 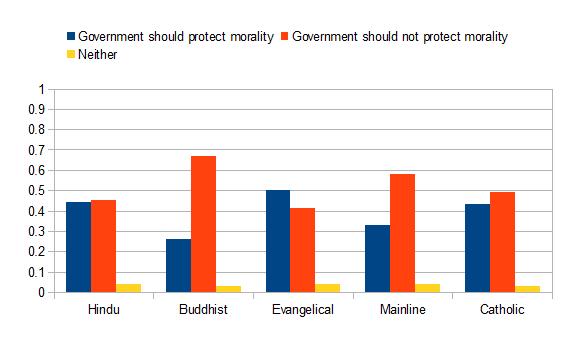 38 thoughts on “What do Hindu Americans think?”