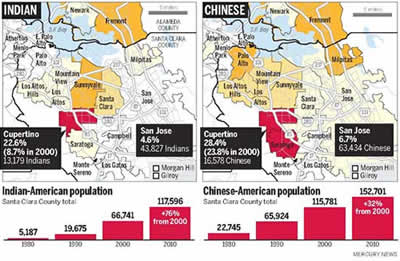 To some extent the story is a recycling of an old American dynamic of the ethnic shift of neighborhoods and communities as they’re impacted by different waves of immigrants, in this case from Chinese to Indians. It focuses on the city of Cupertino, which as of 2010 is 63% Asian American, 31% non-Hispanic white, 4% Hispanic, and 1% black.But a personally interesting aspect is the direct migration of immigrants from India to full-service Indian American communities. This is a totally alien experience from my own. I know that many of the readers of this weblog of a certain age also probably have a hard time imagining this sort of fluid transition from India to “Little India.” Here’s a representative snapshot:

In a typical week, Buch shops for okra, tindora and surti pardi beans at an Indian market. She drops off her boys for cricket practice or tabla drum lessons in town. Over the weekend, she and her husband, Hemant, might dine with friends at one of Cupertino’s new Indian restaurants. There’s even a Tamil language academy held every weekend at the campus of De Anza College in Cupertino.

The Buchs moved from Gujurat, India, to San Jose in 1987, then moved to Cupertino in 2001, primarily for the schools. Cupertino’s elementary and high schools rank in the top 10 of California schools.

In contrast as a kid I recall a 5 hour drive to get basic ingredients for cooking brown food. I spent my high school years in a town where the only other brown people outside of my family was the family which owned the motel, an adopted kid from India, and a Cambodian family. That was it. Period. (you might wonder if a Cambodian family “counts,” but trust me, in that context it did count!)

38 thoughts on “Chindia in the South Bay”