It’s time for wedding of the year! No, not that other wedding across the ocean. I’m talking about the wedding where moustachioed Rajiv finally gets wedded to Vimi on the show Outsourced! It’s been a tumultuous first season run for Outsourced, and this Thursday night on NBC the season finale comes to a glorious Bollywood climactic finish. Will the finish be final or will Outsourced be picked up for another season? The cast and crew has been advocating in the community to make sure the show comes back for another season.

I sat down virtually with the bride-to-be, the gorgeous shaadi-rific Noureen DeWulf about her time on set, a real life shaadi, and her perspective on facial hair. Here’s what she had to say.

Working on the show was a truly great experience. The actors for the most part are a humble and talented group and it is really fun to work with other Indian actors. The producers are pretty incredible people also, having come from and worked on other great shows, so it is a very fun and talented set to be on. I came on in their last few episodes of the season so you could really feel how tight knit they all were and how much they enjoyed their jobs, which is really nice to be a part of.

Outsourced is probably one of the first television series with a largely South Asian cast. I have to admit, I wasn’t a fan of the concept of the show after watching the pilot episode. But the shows that I’ve seen recently are really funny, having moved away from the Tyler-Perry-desified-type jokes, and the characters have far more depth and complexity to them. Do you feel the show has matured? Why do you think it’s important to have a show with a South Asian ensemble cast on American television?>I have always been supportive of the show, more importantly I support ethnic actors, writers and storylines on network television for all the obvious reasons. Ethnic diversity is true to life and so it should have a place on television. All shows mature over the course of a season. Especially the first season. The writers start to get to know the actors better, and so they write jokes for each actor’s particular comedic sensibilities thereby the jokes often seem better played. Chemistry and writing take time to build, this is true for any television show. 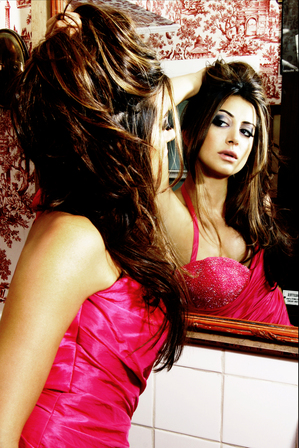 You yourself recently got engaged to the delectable Buffalo Sabre hockey player Ryan Miller. Congratulations! Did you see this Outsourced shaadi as rehearsal run? Did you get any wedding ideas? Elephants? Saris? Beach side shaadi?

Yes, I would like to have an elephant at my wedding also, but not for the groom to ride on, just to pet and feed.

I would imagine that the set of Outsourced has novelty toys scattered throughout. Was there one item that you wish you could have taken and kept for your own?

I could see the hard hat with the beer holders making me popular at house parties.

I met you when you were filming The Taqwacores where you played the burqua clad riot grrl Rabeya. I thought you were great in it and played the role just as I had imagined it while reading the book. What was that experience like and why did you choose to do that role?

Thank you. The book, the director, the vision, and the character were just a few of the reasons why I chose to do that movie. It was an incredible experience, everyone was very passionate.

Breakaway a film I recently worked in comes out in September of this year, I’m back on TNT’s Hawthorne as Nurse Judy, and I am anxiously awaiting word on the pilot I shot with Minnie Driver called Hail Mary.

How attractive is Rajiv’s moustache up close and personal?

I actually like moustaches. So I thought it was pretty attractive. 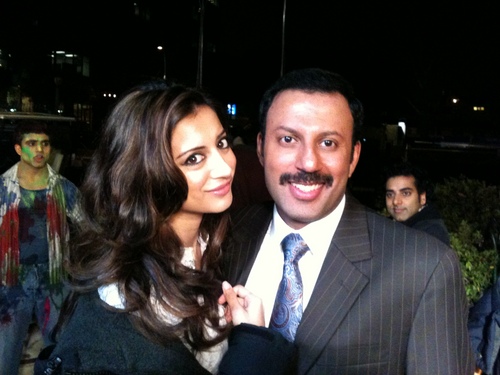 To catch part 2 of the season finale of Outsourced, keep tuned in to NBC and check your local listing. To catch up and watch part 1 of the shaadi here. And of course, to keep tabs on Noureen, follow her @noureendewulf.

70 thoughts on “Outsourcing the Shaadi”