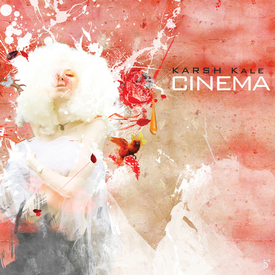 Ever feel like you need a cinematic soundtrack to your day to day life? Karsh Kale’s Cinema may be for you.

The album exploded on the scene last week, going straight to number #1 in the charts. No surprise considering Karsh Kale has been a revolutionary voice to the on the scene for quite sometime. Kale got his start in a rock band, is known for his phenomenal tabla skills, worked in collaboration with the talented Anoushka Shankar in 2007 and most recently has been using his skills to soundtrack movies, such as with Ajay Naidu’s Ashes. It’s no surprise then, with his recent film scoring experiences that he chose to name his latest release, Cinema.

As one of the first groundbreaking genre busting artists in what is now an established musical fusion genre, Karsh Kale can only be referred to as legendary. The album Cinema takes listeners on a cinematic journey, each song reflecting a different emotion and journey. But instead of telling you about the music, how about listening to the music and deciding for yourself. And of course, download the song **Mallika Jam* for free below. The entire album is available on iTunes.

What makes Karsh Kale tick? I wanted to know. Check out the interview with Karsh Kale, and just to mix it up, I asked him to answer in triplicates. Read it below!

What are three words you’d use to describe your 4th solo album, Cinema?

What were your top three favorite moments in creating this album, Cinema?

A couple of your songs on Cinema were influenced by your experience at the Burning Man Festival. What were your top three Burning Man moments?

Have to ask, with a title like Cinema, what are your top three favorite cinemas of all times?

What are three things you can’t leave the home without before you go on tour (beside the musical equipment, of course)?

What are the three albums you are listening to right now?

What are three things you hope to accomplish before the cinematic ending of your life? >

Karsh Kale will be touring to promote this album this next month – you can check out his website to see when he’ll be touring near you. You can also follow Karsh Kale on twitter and of course, you can get his album now on iTunes.

6 thoughts on “The Cinematic Soundtrack of Karsh Kale”