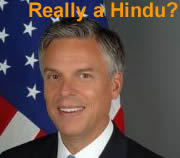 I was just poking around for information on the potential Republican field in 2012 this morning, and I stumbled onto an interesting image of one of the candidates, Jon Huntsman, Jr.. In case you don’t know, Huntsman is the scion of a mega-rich Mormon political family, and viewed as a moderate Republican (though this is mostly because these terms are graded on a curve today, and I say this as a registered Republican). He was appointed by Barack H. Obama to be ambassador to China, but he resigned that position. The supposition is that he might be mulling a presidential run. I am of the set who believes that this is some bizarre joke or tactical feint, as a moderate Mormon has pretty much zero chance in the Republican primaries.

But why the post? First, check out this photo of Huntsman (alternate link if pop-up doesn’t work) with two of his daughters and his wife. How does it make you feel? Here’s an article about Huntsman’s religious pluralism:

A couple of years ago, I celebrated with Hindu Utahns Huntsman’s annual Diwali. Among this group, who traveled widely, Huntsman’s religious beliefs were of little interest, conversation was only about his political leanings. In fact, most of the group were impressed that Huntsman was a political agnostic. Smiling, one Indian-American businessman explained….

Two points. First, Mormonism has a universalist streak, and its doctrine of exaltation probably makes some Hindu concepts less shocking to them then they are to other Christians. Second, our host Abhi is wont to say that South Asians are now part of the American discussion in a way that they weren’t when this weblog started in the summer of 2004. In his inaugural address President Obama mentioned Hindus (see Anna’s post). And now you have a prominent member of what is the de facto white Christian party who openly celebrates Diwali in a nod to one of his adoptive daughter’s heritage.

For me one of the most pleasant things about the image which I linked to above is that the daughter who was adopted from China also has a bindi. Too often a discussion of cultural, religious, and racial pluralism is couched in white/non-white terms. There was, and to some there is, a practical reason for this. But we are now moving beyond the age of white supremacy, and people of other origins and traditions need to meet each other unmediated. Even in the United States you can go and find start ups in Silicon Valley where most of the people in the room are from East and South Asia. This is 2011!