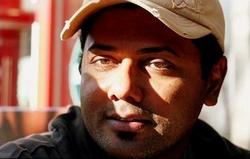 In the immortal words of earnest autotween singer Rebecca Black, “Yesterday was Thursday, Thursday…Today is Friday, Friday…Tomorrow is Saturday, and Sunday comes afterwards.” The viral video sensation “Friday” produced by Ark Music Factory hit YouTube two months ago, and since then the video has received over one hundred million views and broken into the top track lists on Billboard and iTunes. The SF Chronicle’s Asian Pop columnist Jeff Yang interviewed Sri Lanka-born composer and Ark Music Factory cofounder Clarence Jey, who co-wrote and produced “Friday,” to find out more about this guy behind the song and his thoughts on pop music.

Jey’s family moved to Australia where he grew up with a passion for all kinds of pop thanks to his background and location.

“Bowie, Beatles, Abba, Stevie Wonder, yes, but also anything from the early ’80s,” he laughs. “Michael! Culture Club! Those were my icons.” And not just European pop, either; Jey’s South Asian roots and Australia’s presence on the Pacific Rim meant that he was immersed in the star-centric pop landscapes of Asia as well.

“I got exposed to everything — the Bollywood music scene, of course, but also Cantopop and J-pop,” …

Ultimately, Jey came to the conclusion that perfect pop music isn’t about depth, poetry or content; it’s “whatever makes you feel good,” he says. “If it makes you tap your feet, if it makes you hum, that’s what’s important.” (SFGate.com)

After completing an engineering degree, Jey continued pursuing his interest in pop music. This took him to LA to compose songs for an animated kids series, Growing Up Creepie. The opportunity taught him how to quickly churn out pop songs for young people. When his Ark cofounder Patrice Wilson contacted him with the idea of a “pay-to-play service to outfit young idol wannabes with the basic trappings of pop stardom,” Jey thought it could be a winning formula.

“It struck me that if you had the right product and appealed to a very specific market, it could work,” says Jey. “There are proven formulas for young audiences — I mean, Disney has created a whole industry based on them.” (SFGate.com)

At Ark, Jey writes the music and Wilson writes the lyrics. Together they crank out pop songs for youngsters who want to be stars, but given the demand from parents and kids since Ark opened in mid-2010, there is a bit of a bottleneck. Yang suggests an Ark 2.0, with storefronts and a sliding scale of production services in shopping malls across America where teens like to hang out anyway.

With their recent experience and growing music model/formula, it sounds like it’s just a matter of time before Ark and Jey bring another pop ditty into the public consciousness in a major way, whether we’re ready for it or not.

Part of the Black Friday phenomenon was the myriad of covers it inspired. I’m posting a couple of the ones I like below.