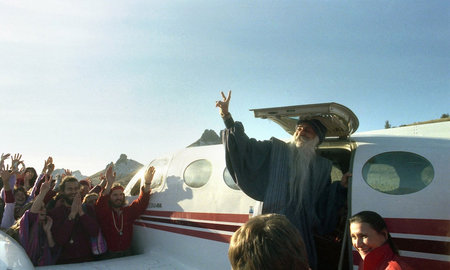 Last month, a group of us were sitting at Currylicious drinking chai and discussing the recent article that had come out about Bikram Choudhury of THE Bikram Yoga. Bikram, apparently, is prone to a “free-loving” nature with his yoga followers or as stated in the title of the article, it is an “Overheated, Over-sexed Cult.”

“Well, that’s not too surprising…” someone mentioned. “It sounds like the Osho Ashram in India where you need to get STD tests before entering.” That’s when our conversation took an interesting turn. The Osho Ashram they were talking about is located in Pune, India. Established in 1974, it was the place where Osho made his eventual return in the 1980s and his final resting spot when he passed away in 1990. But before Osho was known as Osho the “sex guru” of India, he was known as Bhagwan Shree Rajneesh the “Rolls-Royce guru” of Oregon.

That’s right, I said it. Oregon. In the early 1980s Rajneesh and his 2,000 followers set up camp in the ranch lands of Eastern Oregon at a place they named Rancho Rajneesh. The story that ensues has all the twists and turns of a Hollywood big screen hit. This past weekend, The Oregonian wrote up a fascinating five part expose of the Rajneeshees rise and fall, 25 years later. They have colorfully eerie photos from the days of the city’s hey days and have a great collection of documents archiving this bizarre story. I’ve always known that there has been a rich history of traveling gurus coming to America, but this was hardly what I had in mind.

Thousands dressed in red, worked without pay and idolized a wispy-haired man who sat silent before them. They had taken over a worn-out cattle ranch to build a religious utopia. They formed a city, and took over another. They bought one Rolls-Royce after another for the guru — 93 in all.

Along the way, they made plenty of enemies, often deliberately. Rajneeshee leaders were less than gracious in demanding government and community favors. Usually tolerant Oregonians pushed back, sometimes in threatening ways. Both sides stewed, often publicly, before matters escalated far beyond verbal taunts and nasty press releases. [theoregonian]

The story started when Osho/Rajneesh escaped India after a crackdown on his smuggling and tax fraud. His chief of staff was the 31 yr old Ma Ananda Sheela. > Initially soft-spoken and engaging, Sheela charmed Oregon ranchers and politicians. Early on, she hosted a dance in Madras where cowboys partied until dawn. She curried favor, buying 50 head of cattle from a Wasco County commissioner, even though the commune was vegetarian….Anxious to move ahead, she closed the property deal without understanding Oregon law — a pivotal mistake. She didn’t know the state severely limited how many people and buildings could be jammed onto ranch land. [theoregonian]

Thus begins Sheela and her attempts at lying, bribing, and brow beating politicians, townspeople and environmental groups to get what she wants. Then there were the 93 Rolls Royces that were gifted to the guru by Hollywood.

A group of wealthy California donors also proved challenging to control once they moved to the Oregon ranch in 1984. The most notable were Francoise Ruddy, whose former husband produced “The Godfather,” and John Wally, a physician who made a fortune in emergency room medicine…They had no zeal for the lifestyle of seven-day workweeks, shared meals or rudimentary sleeping quarters. Instead, the Californians set up a home for themselves apart from the usual housing. They brought in expensive furnishings, artwork and even their own car, a Jaguar. They obliged the [guru] with diamond-studded watches and Rolls-Royces. [theoregonian]

The situation escalates. Eventually, Sheela creates a gang of sorts to strike out at the commune’s enemies. With the support of an on-site doctor, they conducted secret experiments with viruses and bacterias to create poisons.

In summer 1984, Puja field-tested her work, handing unlabeled vials to those on the secret teams….The operatives knew, or suspected, the brown liquid was salmonella, which produces severe diarrhea and other symptoms. Over months, they were dispatched to spread the poison in The Dalles. They initially hoped to sicken public officials standing in their way, but then pursued a grander scheme to attack innocent citizens.

About that time, Hulse and two other Wasco County commissioners arrived at the ranch for a tour. As the commissioners waited in the hot August sun, Puja approached, offering each a glass of water.

…Hulse remained in the hospital four days, with doctors telling him he would have died without treatment. As he recovered at home later, Hulse concluded the Rajneeshees poisoned him. [theoregonian]

They denied, of course. In an effort to change the law they decide to have one of their own elected into county office.

To elect her, the Rajneeshees hit upon two schemes. One was to depress the turnout by traditional Wasco County residents by making them sick. The second was to pack the rolls with new voters loyal to the Rajneeshees.

Using Sheela’s American Express card, Rajneeshees had chartered buses in cities coast to coast, filling them with homeless people, mostly men…. As the homeless rolled onto the ranch, they were obliged to register to vote. They were expected to vote the party ticket, as it were, when it came time to pick the new county commissioners. [theoregonian]

There was arson of the county planner’s office.

There was the contamination of unattended drinking water with an overdose level of Haldol, at a hearing in the State Library in Salem.

Their top target was Charles Turner, the U.S. attorney for Oregon. His prosecutors were investigating immigration fraud at the commune….One of the assassins traveled the country with another sannyasin, buying pistols that couldn’t be traced. Others set up a safe house in Portland, which became the base for scouting Turner’s home. On one occasion, two assassins sat in a McDonald’s in Downtown Portland across from Turner’s office, sipping coffee and monitoring his movements. They considered gunning him down in a parking garage but couldn’t figure an easy way to escape. [theoregonian]

It self-combusted. Sheela quit the ranch in 1985 and fled to Europe. And the guru?

The guru made a cross-country dash on a chartered jet to escape, but was caught in North Carolina as he was about to leave the country. He was hauled back to Portland in handcuffs, booked into jail like a common criminal. He ordered his lawyers to cut him a quick deal, and he was soon deported as a convicted felon, guilty of immigration crimes.

Courthouses were busy with civil matters as well. Rajneeshee corporations went bankrupt, poisoning victims sued and the state pressed the case against the city of Rajneeshpuram. [theoregonian]

I’m not sure about you, but I was totally sucked into the five part series. It blew my mind that this could have happened in Oregon of all places. And so recently, in the 1980s. Rajneesh spent the mid 80s bouncing around from country to country as he kept being refused entry and finally re-settling in Pune with a name change to Osho. He died in 1990.

You can read the full story and dig through the archives directly at The Oregonian. All photos used in this blog come from that site.

9 thoughts on “Before He Was Osho”