Poking around the 2011 provisional data from the Indian census I noticed that literacy rates had gone up across the board. But, in many states there was the long standing disjunction between male and female literacy rates. So I decided to create some plots, what else?

First, below you see a simple plot of female vs. male literacy by Indian administrative unit. There’s a strong linear relationship, where variation in male literacy explains ~75% of the variation in female literacy. But again I’m a little wary of unweighted plots like this, since urban areas are not representative of the Indian society as a whole. So I also generated a bubble plot in R, where the size of the bubbles is proportional to the total population surveyed. 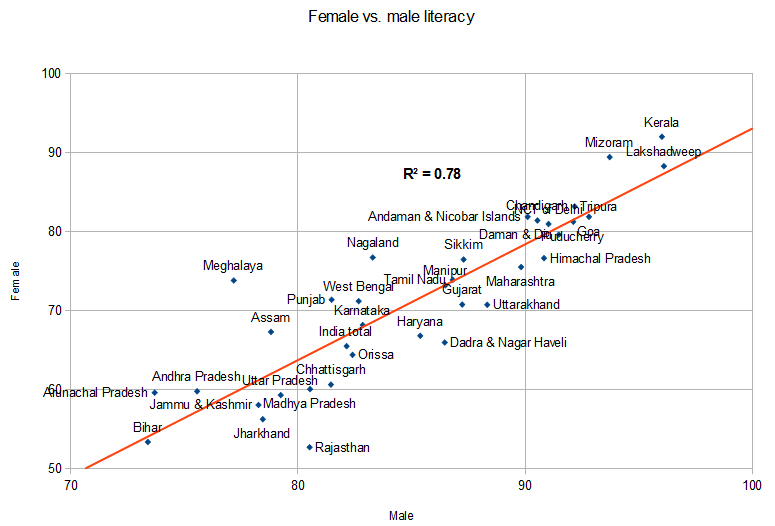 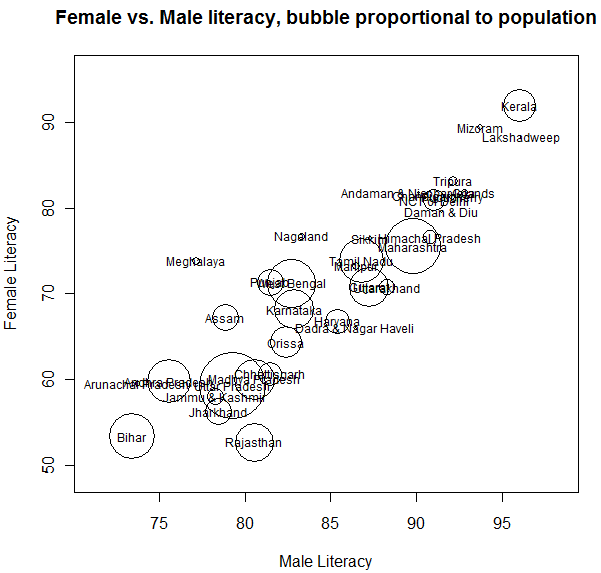 It seems that the lower the average literacy the bigger the gap between males and females. Some of this is due to the fact that above you can’t get above 100%, so there’s going to be natural convergence at the tails of a distribution. So:

1) I converted the literacy proportions to log values. This rescales it somewhat so that extreme values don’t converge as much.

2) Then took the ratios of the log values. Concretely, I did the following for Kerala, for example:

Then I plotted the ratios against the log value of female literacy. You can see the results below: 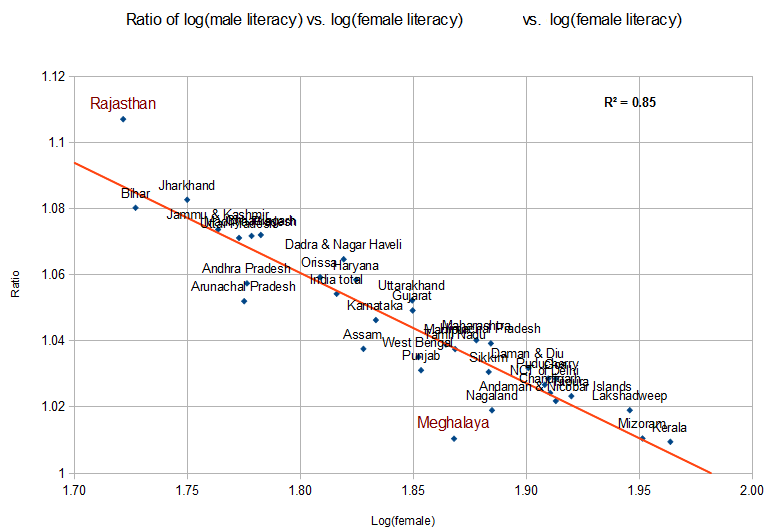 Meghalaya is the outlier. It has an OK literacy rate, but relative balance between male and female values. Why? Those of you ethnographically aware will not be surprised:

One of the unique features of the State is that a majority of the tribal population in Meghalaya follows a matrilineal system where lineage and inheritance are traced through women. The Khasi and Jaintia tribesmen follow the traditional matrilineal norm, wherein the “Kha Khadduh” (or the youngest daughter) inherits all the property and acts as the caretaker of aged parents and any unmarried siblings. However, the male line, particularly the mother’s brother, may indirectly control the ancestral property since he may be involved in important decisions relating to property including its sale and disposal. In the Garo lineage system, the youngest daughter inherits the family property by default; unless another daughter is so named by the parents. She then becomes designated as ‘nokna’ meaning ‘for the house or home’.In case there are no daughters, then a chosen daughter-in -law (bohari) or an adopted child (deragata)comes to stay in the house as well as inherits the property. The tribal people of Meghalaya are therefore a part of what may be the world’s largest surviving matrilineal culture.

The last part is probably wrong. I think that the Minangkabau are the most numerous people who still engage in matrilineal practices, though readers can illuminate as to how pervasive the old customs are in Kerala and neighboring regions. In any case, the point is that culture matters, and that economics alone does not explain everything. Sometimes there is gold to be found in the residuals….