It is well known that in Western Europe the south of Italy is the poorest region. It is less well known, though not totally surprising, that regions of northern Italy such as Lombardy are among the wealthier areas of Western Europe. The aggregation of some of Europe’s wealthiest and poorest regions into one nation, Italy, obscures some very interesting fine scale trends. But since this is a weblog about brown-folk I’m not going to be discussing variance in statistics across the European Union. Rather, I want to address the issue of variance of statistics, and culture, across South Asia. India, Pakistan, Bangladesh, Nepal, and Sri Lanka (Bhutan is so small that I will leave it out of this treatment).

Intuitively we know that comparing Sri Lanka to India, or India to Pakistan, is apples and oranges. In terms of administrative units in the post-Westphalian age they’re equivalent, but we know that a nation of 20 million (Sri Lanka) and one of over 1 billion (India) are ludicrously mismatched. Even when comparing Pakistan to India, you have to face the fact that one state of India, Uttar Pradesh, is more populous than all of Pakistan! If Uttar Pradesh was a nation unto itself it would be the fifth most populous in the world.Obviously as a broader region South Asia, what would once have been simply termed india, has real coherency. It does so genetically and geographically. No matter the religious, social, or class background of a brown desi individual, in the rest of world one is marked off clearly as being “Indian.” And yet being brown does not mean that one is part of an amorphous whole. We know this well, with the cacophony of languages, religions, and cultures, which all partake of the brown identity. This is no different from other civilizations and regional identities. A person from Finland and a person from Portugal are both white Europeans, but very different in deep and significant ways. Similarly, a Kenyan may have little understanding of the details of the life of a Liberian, one being East African, the other West African.

With all that diversity understood, reading this weblog since 2004 has exposed me to a great deal of surprises in cultural variation nonetheless. Here is a 2005 post from Anna on the late, great, television show E.R., in relation to the main brown character, Neela, getting married to another doctor. The first commenter observes:

Hey, A N N A, I lurve ya, but don’t be dissing Kovac… he’s my future husband.

He just suffers from being stuck with some of the worst writers in television. What’s up with a white sari at a wedding though? I found that a little odd.

And here’s a quote from a later post of a movie reviewer:

The representations tread the line between cultural authenticity, sometimes considered stereotype, and colorblindness. The women exhibit some level of conflict with their cultures and are slightly neurotic: Ming Na dreaded telling her immigrant parents that she was having a baby out of wedlock; Nagra quit her job in a bout of rebellion against family expectation to work as a convenience store clerk. The men are dangerous but tender. Phifer grew up without a father and has a temper; Gallant went off to serve in Iraq. I did laugh at the effort to bridge cultures, though, when NagraÂ’s character got married wearing a white sari. White is the Hindu color of mourning.

My own grandmothers had worn white saris after the deaths of my grandfathers, so I too associated white with death. This is not uncommon across Asia. But the assumption is very problematic in South Asia, as you can see in the comments. I’ll quote one which gets to the heart of the issue:

Those of us who grew up in the United States during a time when we were the “foreign kid” or the kid from “India” implicitly represented being “Indian” to the rest of the world. Now, for me this is ironic insofar as I was born in Bangladesh, and you have to go back to my great-great-grandparents’ generation to find anyone born within the boundaries of the current state of India (my maternal grandmother’s paternal grandfather was from Old Delhi). But I look Indian, and frankly no one knew where Bangladesh was, unless they were socially conscious in the early 1970s, or watched a lot of Sally Struthers. But one part of representing brownness to the rest of the world is that you implicitly and unconsciously conflated your own specific representation of brownness with brownness more broadly. When confronted with the concrete range of diversity of authentically brown cultural forms and folkways the water recedes, so to speak, and your own very ethnocentric superstructure, long hidden, is exposed.

I could go on in this personal vein, but let me tack back to statistics, and administrative boundaries. My Canuck nemesis Ikram Saeed usefully pointed out recently that of the nation-states of South Asia only Bangladesh really qualifies in a conventional sense as a nation-state. That is, Bangladesh is a relatively homogeneous state ethnically, so that the national identity and political identities are nearly coterminous. In contrast, Sri Lanka and Pakistan have long been riven by ethnic and religious tensions. India has been a serviceable coalition between various linguistic groups (themselves divided along religious and caste lines). And finally, Nepal has a marginalized culturally Tibetan minority.

More importantly, India clearly has a coherent identity as the world’s largest democracy, but aggregating economic and social data on the national level, and using it to compare India to its neighbors, is possibly very misleading. So I decided to break out some of the data I could find by Indian state, and compare them to Pakistan, Bangladesh, Nepal, and Sri Lanka. You can see the original data in csv format here. I have a methodological addendum at the bottom of this post. 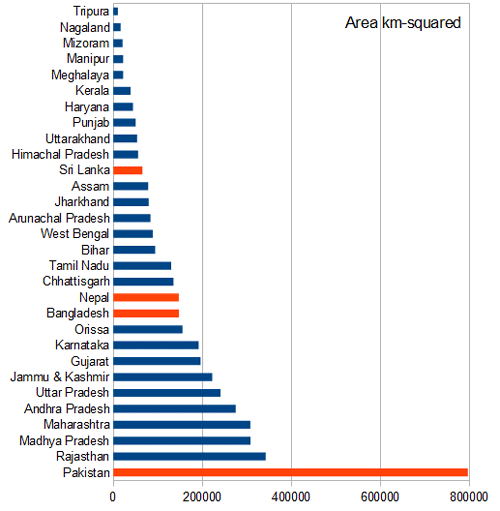 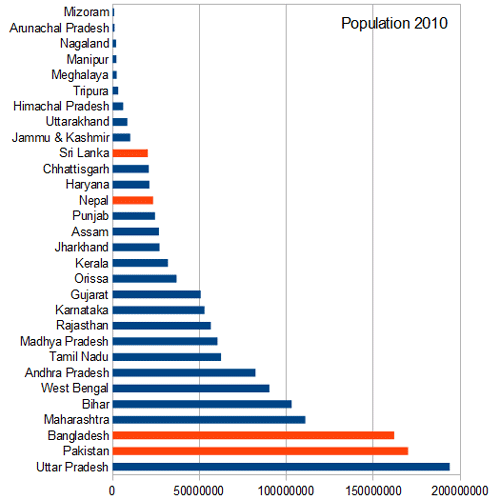 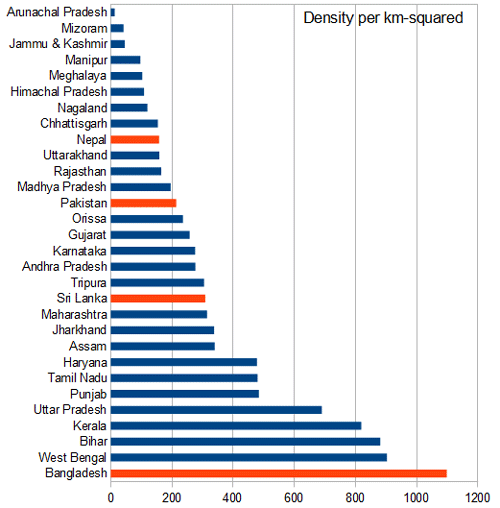 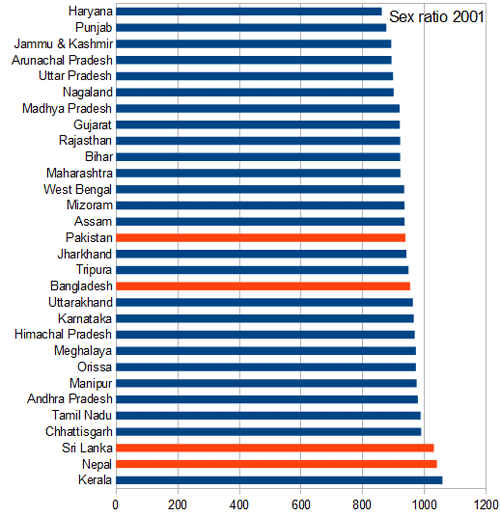 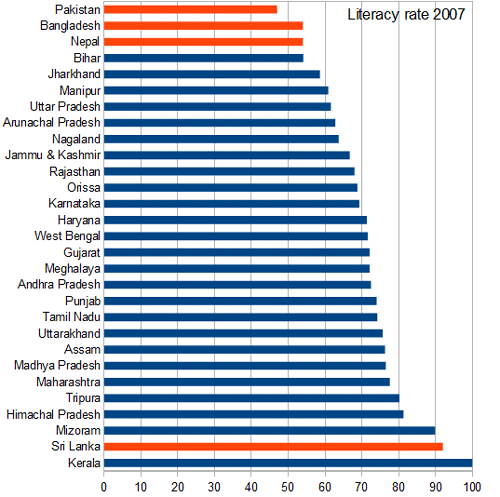 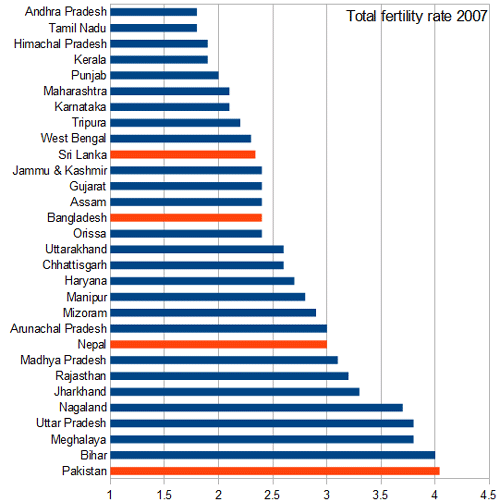 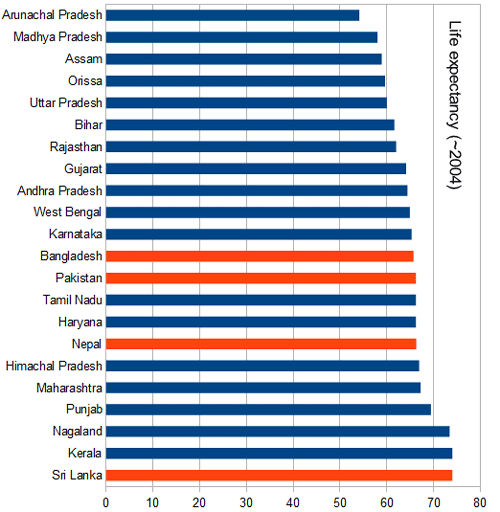 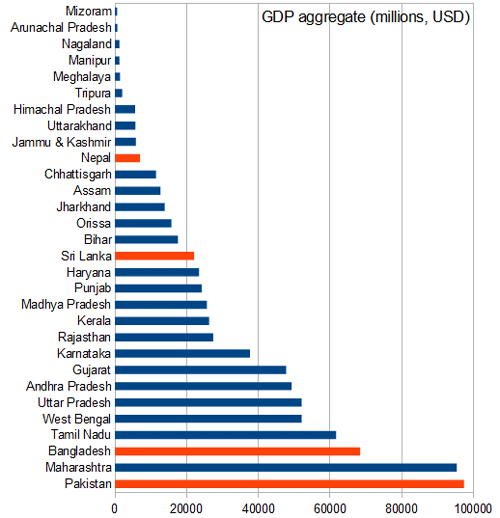 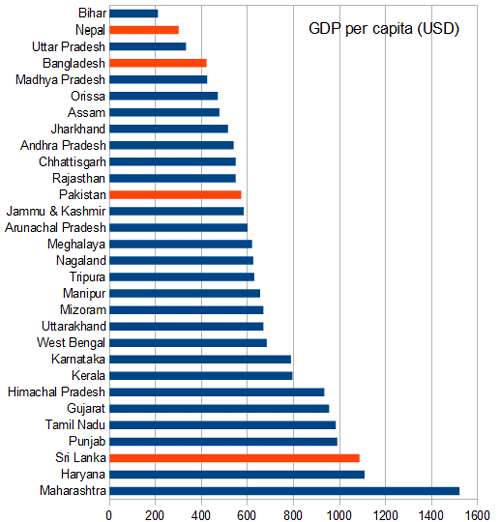 Finally, I think it might be useful to also lay out a “bubble plot.” The x axis is GDP per capita, the y axis total GDP, and the size of the bubble is proportional to population. Excuse the obscuring of some labels due to overlap. 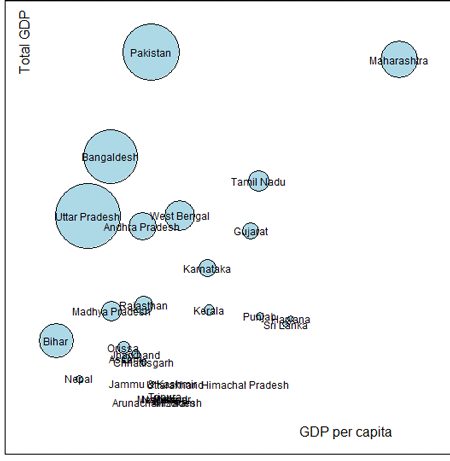 For me the biggest surprise is how big Pakistan is. I assumed that the data was entered incorrectly, but it seems that Pakistan is just really big. Far bigger than Uttar Pradesh. The second surprise was the GDP of a state like Tamil Nadu. The fact that it’s not very poor, like Bihar, but also relatively populous, means it has a large GDP heft. Larger than Gujarat and Punjab.

Methodological notes: Most of the Indian data is from this Wikipedia entry. In its turn most of the data within that entry is from the Indian census, or various health and economic surveys. The life expectancy data I mostly got from Google books. Some states had life expectancy for the two sexes disaggregated. If I couldn’t find it averaged, I did so myself. For the non-Indian states I used the World Bank data sets on Google data explorer. I simply aligned up the years between that and the Indian data. For the GDP I had to re-weight. The Indian government doesn’t seem to calculate GDP the same way as the World Bank, because the Indian aggregate and state level per capita GDP was way too low. So I simply shifted the non-Indian GDP in proportion to how much lower the government estimates were from the World Bank (i.e., the GDP for Pakistan and Bangladesh are lower than you’ll find for that period online because I changed to align with the Indian data). I’m still not totally satisfied with this, as I am suspicious that Bangladesh had a higher per capita GDP than Uttar Pradesh in the time period noted. But it is what it is. Also, the literacy rate numbers vary quite a bit, so they may not be totally comparable cross-nationally because what counts as literate varies depend on the criteria laid out. Life expectancy and total fertility rate on the other hand should be robust survey to survey assuming representativeness and no obvious data manipulation.

Also, you can see above that I removed many small administrative units as well as city-states. Cities in India are always very different from the hinterlands, so they don’t give a good representative picture. By analogy, it’s like discarding Luxembourg from European Union data sets when not weighting by population, since it’s so atypical. I wanted to give a sense of geographical variation, and aggregating city-states with more expansive units causes confusion.

Finally, obviously you should put more weight on intra-Indian comparisons, because the methodology will be more standard than when you compare across nations. Calculations of GDP can be an art more than a science. Additionally, metrics like literacy are notoriously fudged (some sources give Kerala with a literacy of 85%, while others 100%).

60 thoughts on “A civilization of regions”