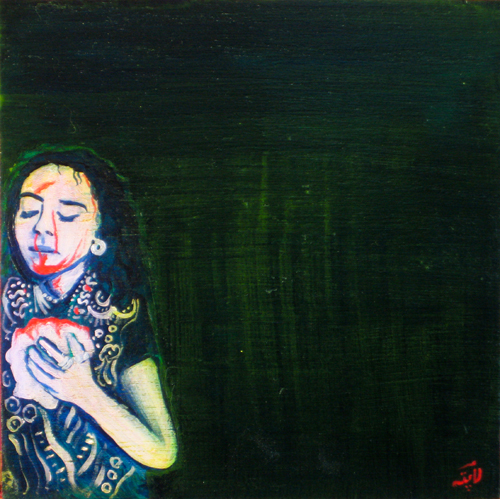 I couldn’t have been alone in this, but it was only after the news of Mubarak’s departure that I watched for the first time the video of Asmaa Mahfouz making her appeal for the gathering that became the protest action of January 25. That video, when posted on Facebook, became a rallying cry. As I learned a bit later from this interview with Mahfouz, January 25 was chosen because it is observed as Police Day in Egypt, and she was interested not in honoring the police but in pointing out that they were the arm of oppression. In the video you see this twenty-five-year-old woman speaking with great anguish of the three Egyptian men who had set themselves on fire to protest. It is humbling, and so wonderfully inspiring, to realize that such a tumultuous movement, one that has moved the entire world, could have had such small beginnings. The West has insisted on monumentalizing the suffering of September 11. And I don’t mean to repeat that gesture when I invoke that day even in this context. But it struck me as I watched footage of Mubarak’s departure that 2/11 was just like 9/11, except in reverse. I felt connected to everyone around me, not in grief, but with that kind of joy that makes new possibilities imaginable. What was odd or at least remarkable about all of this was that my connection to a greater world was experienced through the Internet. I was watching Al Jazeera live on my computer, and I was exchanging emails with friends, and sharing in celebrations on Facebook and Twitter. My artist-friend Daisy Rockwell had been producing small, iridescent paintings of the revolution in Egypt in her Inqilab series. I wrote to her while watching the people celebrating in Tahrir Square, begging her to commemorate the moment with a celebratory painting. Another friend, Ali Mir, who is a business professor by day and a film lyricist by night, penned some impromptu verse which he posted on Facebook: Salaam Misr ke logon ki aan baan salaam / Salaam quvvat-e baazu-e naujavaan salaam / Salaam jazba-e baaghi, ye subh-e shaan salaam / Salaam tujh pe, o Tahrir ke maidaan salaam (here is Ali again, in the role of a reluctant translator, “Salutations to the splendor of the people of Egypt / Salutations to the power of the youth / Salutations to the passion of the revolutionary, to this glorious dawn / Salutations to you, o Tahrir Square.”) As inspiring was the piece by Tariq Ali that appeared on my screen. Tariq Ali had quoted the Arab poet Nizar Qabbani:

There was–there is–such optimism in the air. I’d have been a bit skeptical about all this ordinarily but who can deny the reality of the millions dancing on the streets of Egypt? That and the reality of this. It makes you believe it can happen anywhere.