Jayaben Desai passed away recently at age 77, leaving an extraordinary legacy in labor history. With a handbag in one hand and a bullhorn in the other, she led a two-year strike in the mid-1970s protesting the unequal pay and poor treatment of workers at a North London Grunwick film processing factory. The factory’s workforce consisted mostly of desi immigrants from East Africa, and many were women.

Before she walked off the job one day in 1976, the diminutive Gujarat-born Desai who came in at under 5 feet tall and immigrated to England by way of Tanzania, had a few words for her manager Malcolm Alden.

What you are running here is not a factory, it is a zoo. But in a zoo there are many types of animals. Some are monkeys who dance on your finger-tips, others are lions who can bite your head off. We are those lions, Mr manager.Desai was fed up with the conditions at the factory owned by Anglo Indian businessman George Ward, praised by Margaret Thatcher as a “champion of freedom” but called George Amin by protesters who quoted him on their pickets–“I can buy a Patel for Â£15.” Overtime was required and a week’s pay was as little as Â£28/40 hours when the national average was Â£72 and for women in London, Â£44. Her efforts on behalf of the workers led to widespread union support including from miners and postal workers groups–the latter stopped deliveries to the factory for a time.

This kind of support was unheard of before in Britain for a labor dispute in which most strikers were an ethnic minority. So even if the 1976-1978 Grunwick strike did not get strikers their jobs back or the factory to recognize unions, Desai’s leadership had broad impact. She helped to transform the way unions and workers viewed immigrant women colleagues. After the strike started the factory raised wages too, and today its employees get pensions. 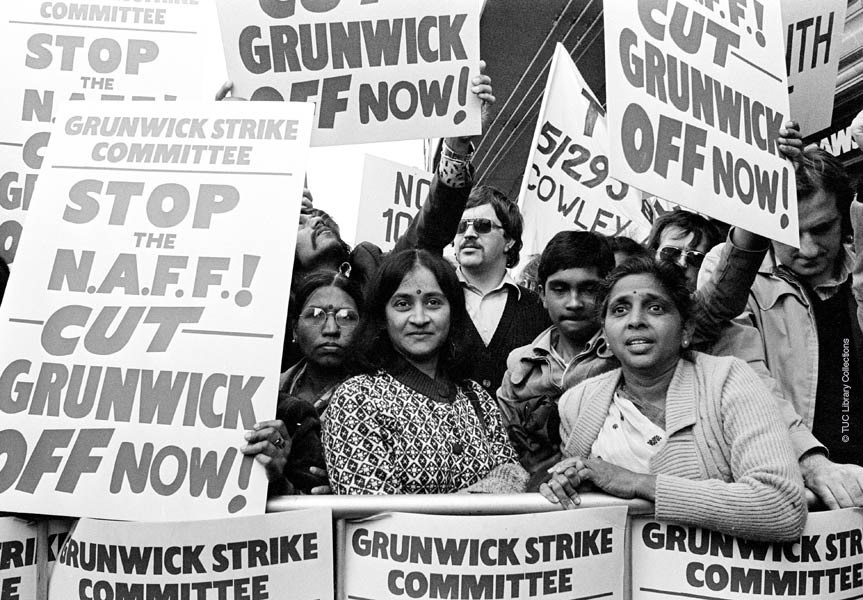 Years before people were watching inspirational films like Norma Rae or Made in Dagenham about women in the labor movement, they were watching a confident and assertive Desai on TV news coverage of the strike, shattering stereotypes of South Asian women workers as silent or docile.

Photos of the Grunwick dispute by Homer Sykes show what the strike was like, including the police and political opposition Desai faced. Getty Images has a Grunwick archive too.

There’s a fair amount of information online about the Grunwick strike and Jayaben Desai for those interested. For starters: Wikipedia’s Grunwick dispute and the website for the exhibit Striking Women: Voices of South Asian women workers from Grunwick and Gate Gourmet, which includes documents like pay logs and news clippings from the time.

11 thoughts on “We Are Those Lions”