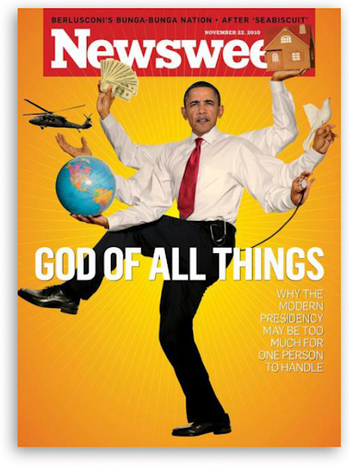 Here we go again. And by that I’m referring to the Ms. 2009 cover depicting a multi-armed mom. This time, it’s an image of President Obama. Newsweek’s November 22nd, 2010 issue headlined “God of All Things” shows Obama on the cover balancing multiple policy issues and balancing on one leg. The image is of Hindu deity, Shiva, also know as “the destroyer of the world.”

Suhag Shukla of the Washington-based Hindu-American Foundation told FoxNews that her group doesn’t think Newsweek meant to be malicious, but believes ‘the cover was in line with the media’s comfort of utilizing Hindu symbols or deities to symbolize an issue.’

Zed said that Hindus understood that the purpose of Newsweek was not to denigrate Hinduism, but warned casual flirting like this sometimes resulted in pillaging serious spiritual doctrines and revered symbols and hurting the devotees.[dailymail]

In the rest of the world, Hindus are outraged. > Hindus in Malaysia are taking more drastic measures. They are demanding the government remove the issue from all of the country’s newsstands. [abc]

It feels like this is turning into an annual thing, isn’t it? A major magazine anthropomorphizing a Hindu God into a (famous) person and putting it on the cover seems to be an annual occurrence. What may be worse is that they really should have done their research because what had initially been a sympathetic cover of everything the President had to juggle quickly turned into a jab at the President as being a world destroyer. After those 12 stitches to his lips today from a holiday basketball game, it’s pretty clear he’s not invincible.

How offended were you, Mutineers?

To provide context, the above cover is from the National Review, June 2009. Related blog post at Swami Sotomayor.

The above cover is from Ms. Magazine, July 2009. Related blog post at Keep Your Hands to Yourself.

My question is, why were more people offended by the Ms, and National Review covers (see comments in previous blogs) than they were of the Newsweek cover? How is this different?

160 thoughts on “Obama, The Destroyer of the World [updated]”