In case you haven’t heard about the major announcement in India this morning, President Obama has called for India to join the UK, US, France, Russia, and China as a permanent member of the U.N. Security Council. Practically speaking of course, there would need to be a complete overhaul of the UN structure if that were to happen, but this is still a significant announcement and one that will most definitely antagonize China:

Members of Parliament reacted with sustained applause. But neither the president nor his top advisers offered a timetable for how long it would take to reform the council, or specifics about what steps the United States would take to do so. Last month, India won a two-year non-permanent seat on the council, which currently has five permanent members: Britain, China, France, Russia and the United States.

But expanding the body will be a complicated endeavor that will require the cooperation of other countries and could easily take years. “This is bound to be a very difficult process and it’s bound to take a significant amount of time,” William J. Burns, the under secretary of state for political affairs, said here…

“In Asia and around the world, India is not simply emerging,” Mr. Obama said in his speech, echoing a line he used earlier in the day at a joint news conference with Mr. Singh. “India has emerged.”

Many Indian officials had worried that the Obama administration was less interested in India than China, and that the bilateral relationship was lacking a “big idea,” such as the landmark civilian nuclear agreement between the two countries under former President George W. Bush. [link] 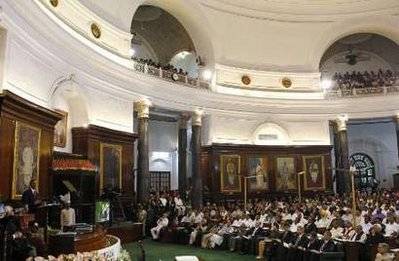