Last week, the White House decided that Obama would not be going to the Golden Temple, even though this was tentatively on his schedule for his trip to India in early November.

As the story was reported, the White House pulled out because Obama was told he had to cover his head with a bandana rather than a baseball cap, and White House Staff were afraid this would make it look like Obama was wearing “Muslim garb.” [See NYT, Daily Beast]

The problem is, I find that story absurd. I’m pretty sure it’s wrong, and here’s why:

any covering, even a baseball cap, would be acceptable. “We would welcome President Obama as long as he covers his head while inside Harimandir Sahib (Golden Temple). Caps or hats are not barred by Sikh dharmik maryada (religious code of conduct). After all even Queen Elizabeth wore a western hat when she came to the temple” 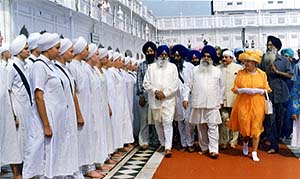 But here’s my biggest issue with this narrative: a bandana on Obama’s head would have made him look gangster or hipster, but certainly not Muslim.

Why has the story stuck? Well, it has some basis in fact (see this early statement) but more importantly, it fits this narrative of Obama as gutless and feckless, as Tunku Varadarajan puts it: “The president has shown, more than once, that he lacks the courage of his cosmopolitan convictions.” And actually, there I think he has the story half right.

Here’s why I think they did cancel the visit:

1. The security risks were very high:

Mr Obama’s security advisors feel protecting him in the crowded and congested by lanes of the tightly packed walled city around the holiest of Sikh shrines would be a nightmarish undertaking.
“A visit to the Golden Temple necessarily entails a road journey through ground that would be a sniper’s dream come true. There is virtually nowhere within safe reach of the sikh shrine where a helicopter can land,” said a senior defense and security affairs expert. [cite]

2. The political benefits were close to nil. Unlike Stephen Harper, the Canadian PM, who had a large Sikh constituency to please, Sikhs are negligible in terms of their political impact in the USA. It’s just a fact. There’s a reason why not one previous President has ever gone to the Golden Temple on their visit to India yet.

3. The head covering issue is a red herring. The real issue is photos of Obama surrounded by turbaned bearded swarthy men in an exotic landscape of golden domes and weird religious music, at a time when 20% of Americans think Obama is a Muslim, and his political staff still have nightmares about his last turban photo. I’m pretty sure they want to keep turbans out of the frame with him between now and the next election, except for photos with Manmohan Singh.

What I don’t understand is that given the security and political risks to such a visit, why it was ever on his schedule in the first place, however tentatively. Had they not looked at a sat map of the location? Had they not realized that there would be turbans nearby?

Here’s my hunch – Obama wanted to go, and put it on his schedule, but it was so low priority that nobody bothered to think much about it until the story came out at which point somebody on his staff freaked out. And it could be that I’m wrong, and somebody in the White House freaked out over a bandana. But if that’s true, they’re smoking the same stuff Juan Williams is smoking, and that’s very sad to hear indeed.

[Below is a photo of Canadian PM Stephen Harper at the Golden Temple, not looking like he's wearing Muslim garb at all] 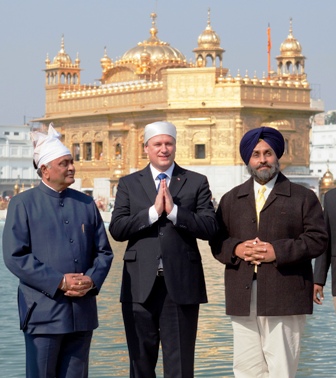 32 thoughts on “Pondering Obama and the Golden Temple”